Tune In For The Hero Dog Awards

It's time to take a few moments to recognize just how best man's best friend can be. On Thursday, November
8, Hallmark Channel premieres the 2012 American Humane Association Hero Dog Awards at 8 p.m.
Eastern/ 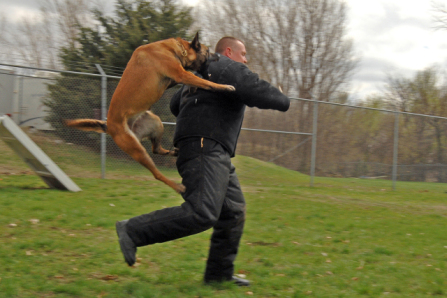 Police Dog Training (Public Domain Image)7 p.m. Central Time. Some of the most amazing dogs in the
country in the areas of police work, search and rescue, military, and
service animals will receive awards.

The American Humane Association created the Hero Dog Awards to recognize that special relationship between humans and canines. The annual competition seeks out dogs that go above and beyond in their partnership and friendship with people.

Winners in each category were selected from an initial pool of 350 nominees in online voting by millions of dog-lovers.

Amazing dogs, from little Daniel, who survived a euthanasia attempt in a gas chamber to become the spokes-pooch for anti-gassing legislation, to Jynx, a police dog who saved the lives of officers while under fire after his partner was fatally wounded, will warm the heart.

Last year's Hero Dog winner was Roselle, a guide dog who led her blind master to safety on 9/11. In the midst of the chaos of the terrorist attack on the World Trade Center in New York City she brought Michael Hingson down 78 flights of stairs.

Check your local television listings for Hallmark Channel and the Hero Dog Awards.

Dogs
Fun
News Stories
You Do A Service For Your Country And Your Dog Is Proud To Show It!
PetsLady's Pick: Funny Miracle Dog Butt Of The Day