Kiwi -- The Hairy Bird Not The Hairy Fruit: Trivial Tuesday

The kiwi is a flightless bird about the size of a chicken with hair-like
feathers native to New Zealand. It is closely related to other
flightless birds such as the ostrich and the emu. There are many
interesting facts about 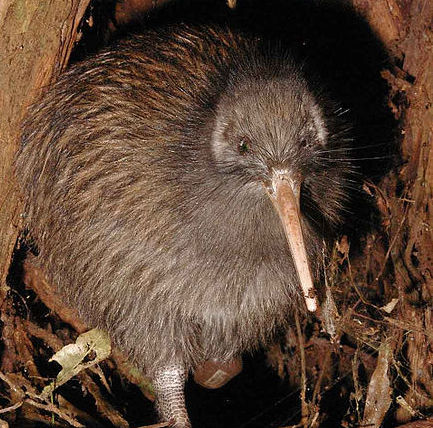 Kiwi (Public Domain Image) the bird. Perhaps one of the most interesting is
the persistent and perpetual myth that the bird is either blind or
half-blind.

In relation to their size, kiwis lay the largest eggs of any bird on the planet. The egg can be up to one-quarter of the female's body weight. To achieve such a feat the female must eat three times her normal intake. Just two or three days before she is ready to lay the egg she must fast because there is no room to fit the food.

Kiwis have whiskers, live in burrows instead of nests, their nostrils are at the end of their beaks, and they mate in monogamous couples. They are also of vital importance to the native Maori culture in New Zealand.

The status of the different species of kiwi range from vulnerable to critically endangered. The biggest threat to their survival has been a loss of habitat.

Birds
Fun Stories
Science
Weird, Odd or Bizarre
Wildlife
Penguin Spy Robots Invade The Colony For The Inside Scoop
Cock Of The Walk, Or How Did The Chicken Cross The Sea?
The Umbrella Bird -- The "What An Odd Looking Avian" Animal Video Of The Day!!!
PetsLady's Pick: Cute Prairie Dog And Friend Of The Day
Comments