In Tibet, Nepal, and Mongolia, yaks are raised for their milk and to be used as beasts of burden. They use the yak milk much as we use cow's milk -- to make butter, yogurt, and cheese. The cheese is called chhurpi in 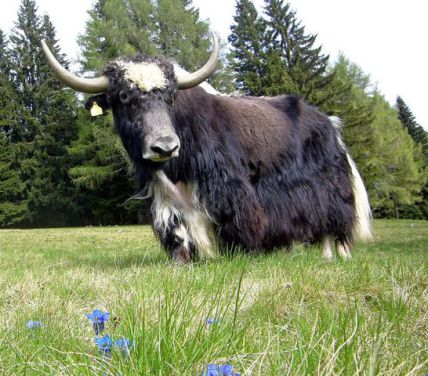 Yak (Photo by Pongratz/Creative Commons via Wikimedia)Tibet and Nepal, and byaslag in Mongolia. The butter is used to make butter tea which Tibetans drink in massive amounts.

So, is the milk pink? Yes, for a short time after a calf is born the milk is tinged with a touch of blood. This early milk is called beastings. It contains more protein than regular milk. Eventually, though, the milk returns to the standard white or bluish-white color of regular milk. Therefore the answer is also no, the milk used for human consumption is not pink.

Pro Pet Tip: Setting Up A Fancy Rat Cage
Sleeping With Pets: Is There Really Anything Wrong With It? The Pros And Cons
Introducing Princess Leia (or) How Easy it is to Adopt a Little Friend -- Part 2
Comments