Turtle That Pees Through His Mouth: Trivial Tuesday

The Chinese soft-shelled turtle is not the handsomest creature on the planet, to be sure, but it has its own claim to fame by being able to kind of pee out of its mouth. 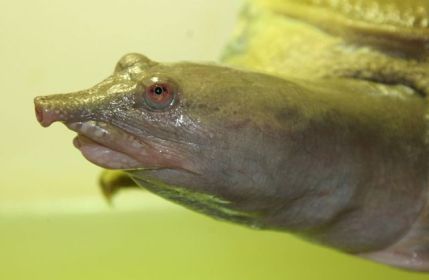 Scientists noticed that when the turtle had emerged onto dry land it would plunge its head back into the nearest puddle. They found that the turtles will then expand and contract its mouth to expel waste -- something like a rinse and spit for reptiles.

The turtle's digestion gets going it breaks down protein in the liver and it ends up as urea -- just as it does with humans. To expel the urea from the body, humans process it through the kidneys which turn it into urine. The turtles send it the other direction.

The reptile ships the urea north to gill-like studs in its mouth. It is then able to breathe and excrete urea at the same time. This adaptation, which makes us a little woozy to think about, is 15 to 50 times faster than the kidney route. Their kidneys only expel about 6% of the urea that builds up in the digestion process.

Researchers believe that this phenomenon is due to the salt water environment the turtles inhabit. The only other animals that demonstrate such an ability are fish, who are able to exrete urea via their gills.