Tricia And Sweety Prove That Love Is Blind

The life of a dairy cow on those large commercial dairy farms is not a
happy one. It is certainly not the pastoral scene of cows gently grazing
the grasses of pastures. It is life standing on concrete and being
repeatedly impregnated and giving birth until it is time to head for the
slaughterhouse. But sometimes someone steps in and creates a happy
ending for a cow here and there. 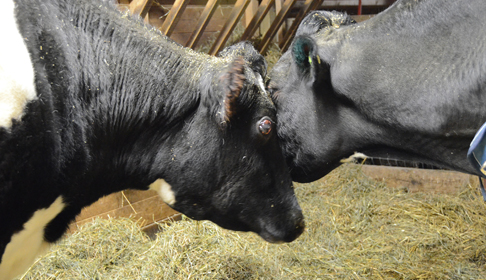 For Sweety, a blind Canadian dairy cow, her rescue took her on a journey that ended in love and friendship instead of the slaughterhouse. In a twist of good fortune someone from the dairy mentioned Sweety's plight to Rose, a friend who runs a horse rescue organization called Refuge RR. She checked around and found a place for Sweety with Farm Sanctuary in their Watkins Glen, New York, facility. The organization was happy to take on Sweety, hoping that she would be able to help out Tricia, another blind cow they rescued in 2008.

Tricia had lost her cow companion to cancer and, as a herd animal, was distressed to find herself suddenly alone. In Tricia's case she was born blind and was also slated for the slaughterhouse when she was rescued. 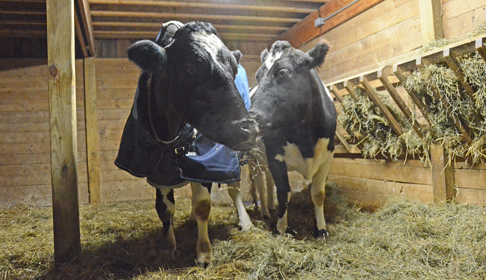 Sweety was driven to her new home by Rose, and followed by a Farm Sanctuary team to help if anything went wrong. They arrived at the sanctuary after dark on a cold winter evening. Sweety was led into her new home, given a late dinner of hay, and then bedded down for the night in her new pen. From an adjacent pen, Tricia was able to smell Sweety right away, but their meeting would not happen until the next morning. In the meantime they just gently mooed to one another.

The next day Sweety was led into Tricia's stall while Tricia was busy with breakfast. When Sweety leaned in for a sniff, Tricia became intrigued. Within minutes they were gently nuzzling one another and sharing a meal. By that evening they were happily nestled in the hay together and keeping one another company. All of a sudden life was good.

Since Sweety had been kept indoors all the time she didn't have a winter coat. For that first winter she wore a horse blanket. A veterinarian worked with her to make sure she gained some much-needed weight and make sure that she wasn't in pain from her eyes or her lame foot. On nice days she began venturing outside to enjoy some sunshine. She began to relax as she realized that her new home offered only comfort and kindness. And now the pair are BFFs (bovine friends forever).