A trio of dogs have been specially trained to sniff out stowaway zebra mussels to keep them from infesting new ponds, lakes and other waterways in St. Paul, Minnesota. 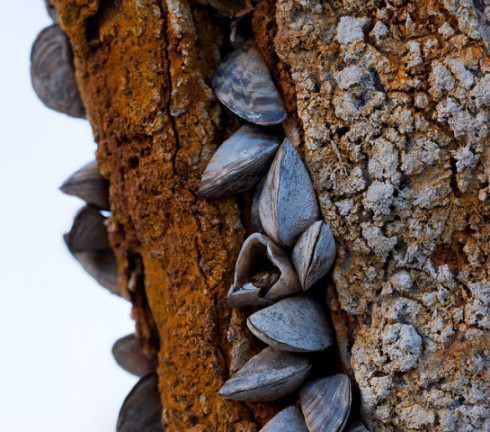 Over 100 of Minnesota’s lakes, rivers and streams have been infested with these foreign mollusks, which originated from Russia, but was accidentally brought to the United States in 1988. Zebra mussels are a problem in North America because they are filter feeders that spit out a copious amount of mucus along with the filtered water, which leaves a murky mess behind. In addition to their snotty eating habits, zebra mussels have been known to clog water pipes, cut the feet of swimmers and their planktonic life stage makes them extremely difficult to maintain and remove from the wild.

Thankfully, these dogs quickly learned the scent of zebra mussels, and are used to identify boats that have been contaminated with planktonic mussels, so they invasive pests aren’t spread to clean waterways. The Minnesota Department of Natural Resouces is going to take the trio of canine helpers to popular boating hotspots and lakes that are more susceptible to infestation.

Californian wildlife officers have been training dogs to slow the spread of zebra and quagga mussels for a while now, and they currently have over a dozen dogs searching for mollusks. With one dog bought from a breeder and two adopted from local shelters, the DNR’s new mussel-busters are welcome additions to the K9 team. If the mollusk-sniffing dogs are effective, the DNR would consider expanding the program.

Dogs Banned On The Subway? New Yorkers Have It Covered
Start Your Own Dog Walking Business

A Puppy In France: From Russia With Love
Comments