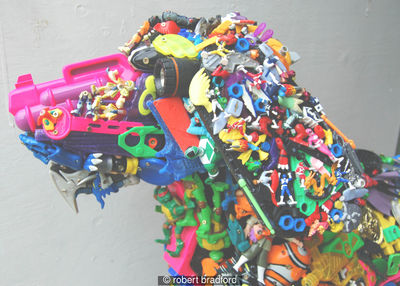 What can you do with those old used up toys that your children used to play with, but are now collecting dust in the corner of your attic? Artist Robert Bradford makes good use of them and creates sculptures out of these toys. 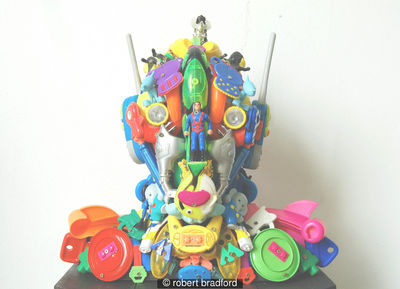 I asked Robert how he got started in doing this: "For a long time I had always liked to use materials that were not bland i.e. had some kind of history of weathering or use. One day about five years out in the studio I was looking into my children’s box of outgrown / discarded toys which happened to be out in the same building and responded to the random collection of colours shapes and forms they made. I figured that if I could find a way of putting them together to constitute a larger form they would have great potential as a larger scale sculpture. Over the next few years I experimented with various construction methods (which all had their downsides) - before one day about a year ago in frustration I tried putting a screw through a toy and then many others. To my surprise most didn’t crack or shatter and the new series has been largely based around and developed from that fact." 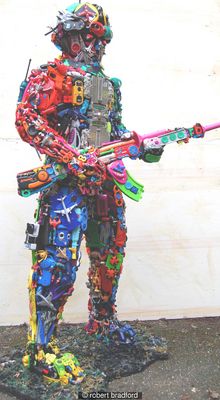 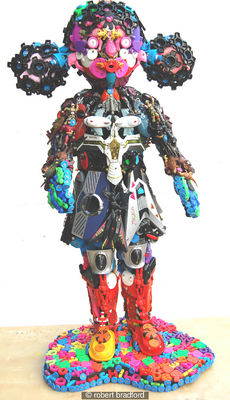 I was also curious as to the type of reaction he recieves from the public when they view his work. Here’s what he had to say: “Public reaction is largely very positive (in some cases gleeful)- in some cases children drag their parents to come and look at the pieces and then a whole sequence of recognition and recollection usually begins, naming the various toys and recalling the times and circumstances of their use. There is usually some fascination, both with them and with the process of their construction and sometimes outright laughter. There is usually a whole process of going back and forth between looking at the sculptures as a totality and the individual parts they are made up from (which of course is my intention). Some people of course just say they are rubbish which of course is perfectly true! There is also often talk about consumerism and waste, which whilst not being my central concern is also in my view positive when it occurs. Some find the sculptures beautiful/ curious/ scary/ weird/ emotional and etc. (which considering all they are really is bits of what is usually seen as rubbish) is great." 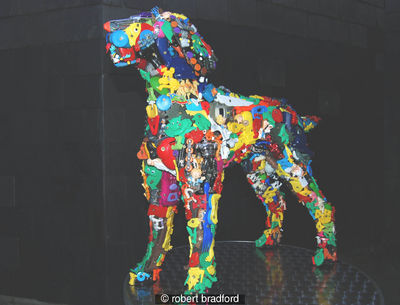 "In a way the sculptures are also history pieces in the sense that you could date any one of them roughly from the time that the last toy screwed on to the structure that was produced.” 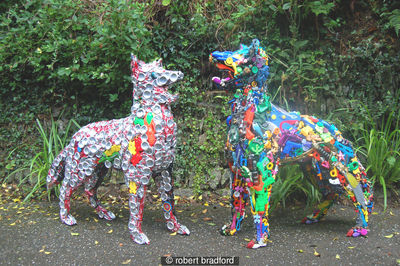 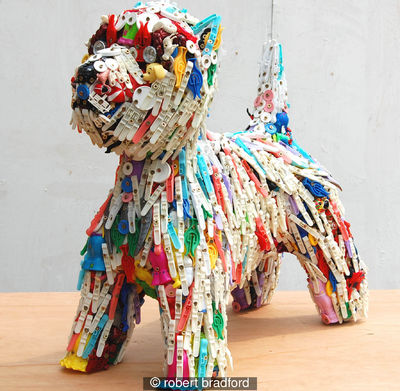 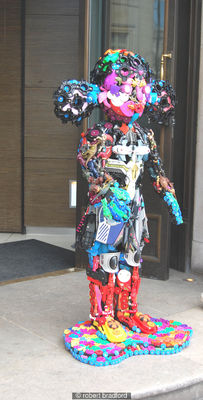 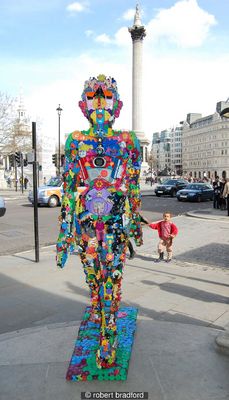 I don’t think they’re rubbish, these are actually pretty cool. I’d love to have a backyard filled with every one of these sculptures. But I’m sure my neighbors would think I’m weird; a 30-year old woman with toy sculptures in her yard. Oh well, I’ve done worse.

Many thanks to Robert Bradford. You can view more of his amazing art at his website.

22 Of the Cutest Barnyard Kids – A Baby Goat Gallery!

Silver Spoon Sunday: Have A Nice Nativity
Invasion of the Teddy Bears! The "I have no idea what's going on" Animal Video of the Day!!!
3D T-Shirts Featuring Pets Come Alive With Amazing Depth And Detail
Comments