Tortoises Get Tattoos To Fend Off Poachers!

Rhinos and elephants aren’t the only animals that are commonly harvested for their parts, as several large tortoise species have had their numbers slashed in the wild as pets. Thankfully, this one oddball technique seems to keep the poachers at bay…

Take the critically endangered ploughshare tortoise, whose range is limited to northwestern Madagascar, with a population of around 400 individuals. At least 82 of these tortoises have been seized by government searches of would-be poachers and smugglers worldwide for the illegal pet trade since 2010, and it’s all due to the reptile’s stunning large and rounded golden shell. 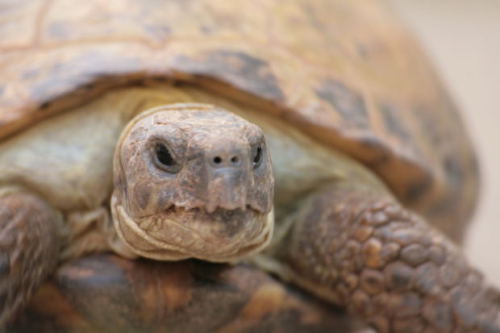 Since the threat of jail time seems to be worth getting as much as $40,000 per tortoise, conservationists in Madagascar, Singapore and California have taken to lightly carving serial numbers and unattractive symbols into the backs of ploughshare tortoises to keep them from being harvested for the pet trade later.

To date, there’s never been a recorded example of an etched tortoise appearing in a marketplace, so the practice seems to be effective is dispelling the illegal pet trade so far. Conservationists know that the tattoos, engravings and other inscribing methods can hurt the tortoises, and that they take care not to harm the animals by lightly carving into the upper keratin layers of the tortoise’s shell. Purposely disfiguring commonly poached animals isn’t anything new, but rhinos and elephants that have had their horns and tusks sawed off generally aren’t threatened by illegal hunting.

Resurrection Biology For Those Who Think Extinction Stinks!
Orca Evolution? The Killer Animal Video of the Day!!!
Comments