Growl back those prices and get outta my way, the Pet Food aisle beckons and Fido's about to eat a greeter! 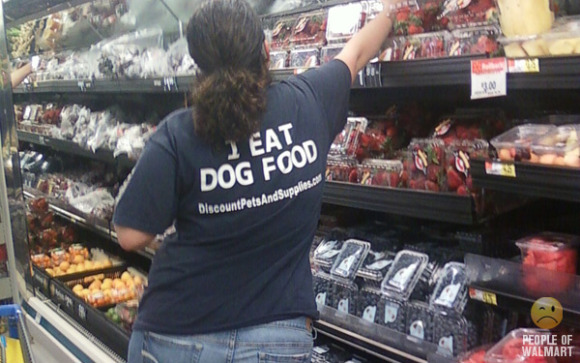 Yes indeed, if you thought the People of Walmart had gone to the dogs, imagine how bizarre their dogs are. Better yet, spare your imagination and brace yourself for The Top Ten Dogs of Walmart! 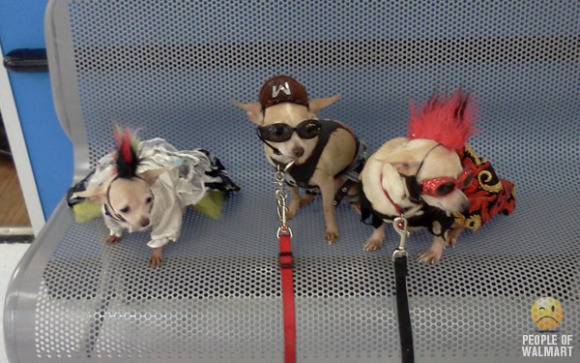 Take one part The Benchwarmers, add a pinch of The Beastie Boys and throw in Sid Vicious reincarnated as Chihuahua triplets for good measure and you've defined this trio of punked-out pugs. Could it possibly get any worse? Yes, yes it can... the Mohawk'd mutt on the left has slipped his leash.

What's it like being a New Wave canine in an autotuned world? For one thing, the humans are a lot bigger: that moon moving in to block out the sun is... hey, that's no moon! Such is life on a bench at Walmart, dodging derrieres by day and, uhh, more derrieres by night. Oh, the humility! 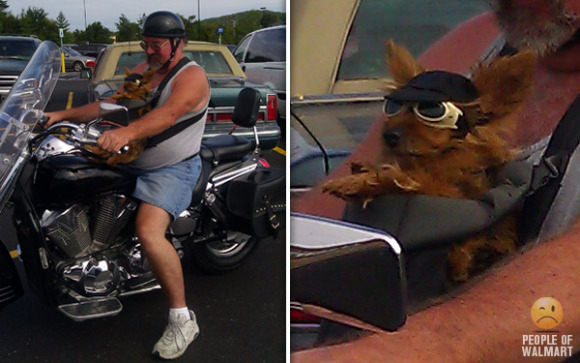 In fact, don't drive with “Marlo Brandon” here at all if you can help it: the guy's idea of protective biking leathers is his own severely sunburned skin. Even Eric von Zipper was a better-dressed biker, you stupid!

God may be his copilot but Dog is his hood ornament – ever hear of a sidecar, motorcycle man? Our uneasy rider is keeping his mouth shut for a reason: flossing out bugs can get very tiresome, very quickly. At least The Wild One's ensured his precious pet is properly protected with a cap & goggles seemingly purloined from a World War One flying ace. All that's missing are a few medals and... Muttley, is that you?? 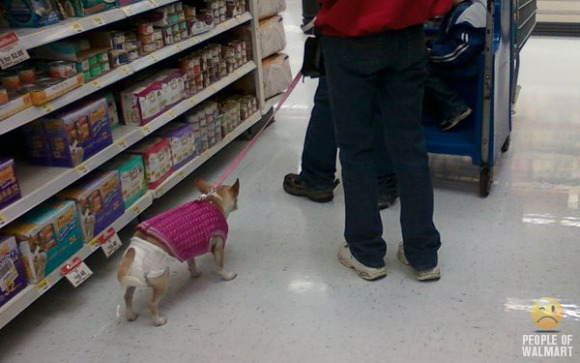 Everyone loves an underdog... except when it's roaming through Walmart in its underwear. As disturbing as it looks this should be a good thing: no need for the old “cleanup in aisle 2...3.. 4...” when the mess-maker's been fitted with an onboard pooper-scooper.

Thoughtful or not, can we not spare some pity for the poor pooch in Pampers? You just know the other dogs (cats, birds, goldfish) are snickering at him behind their paws (wings, fins, etc). It's tough to be a member of the animal kingdom when everyone treats you like the court jester. Try putting the shoe on the other foot, as it were. You'd be mocked too if you browsed big-box stores pants-less... I repeat, pants-less. Of course, this being Walmart, who dares to throw the first stone? Depends... 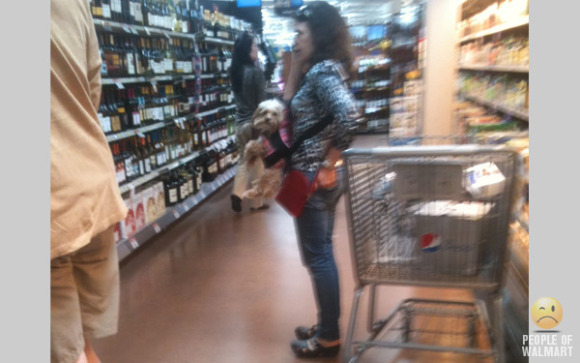 You never know when a celebrity of any list is gonna pop in to Walmart and... whoa, is that Carla from Cheers? Could be: she's browsing the wine section after all but what's with the pet strapped across her chest? We've heard of “playful puppies” but this sure isn't it. As for having dog tags hanging around your neck, that's cool as long as they're tags, not dogs.

I guess Rhea Perlman read a sign reading “No Pets On The Floor” and saw a loophole big enough to drive Harry Dunne's MuttCutts van through. Now that's just dumb... and dumber. Keeping a pet in suspended animation can't be a good thing, especially considering it's suspended from the front and anything that might fall lands right in the suspender's path. Definitely not a sandals day, Rhea. We wonder what her hubby think about this, isn't she married to that troll Danny DeVito? OMG that could be their kid!!

6) An American Werewolf in America 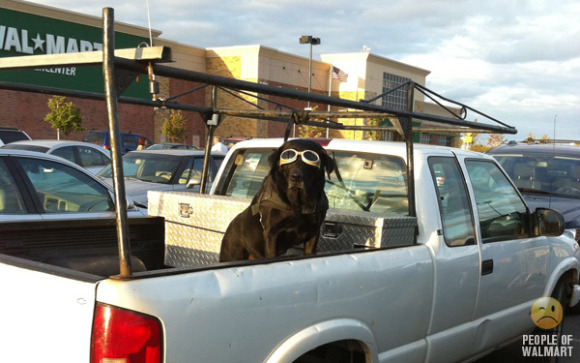 We dunno what he's got in that diamond-plate pickup box – gold bars, a few keys of uncut Coke, ex-wife number three, his lunch or all of the above – but it's safer than if it was locked in Fort Knox thanks to the unstinting efforts of Man's Best Fiend.

Not that the dark guardian appears to be making much of an effort but really, why bother? Just being there and rocking those wicked shades should keep anyone with itchy fingers far away lest they want to have that “itch” removed if you know what I mean, and I think you do. 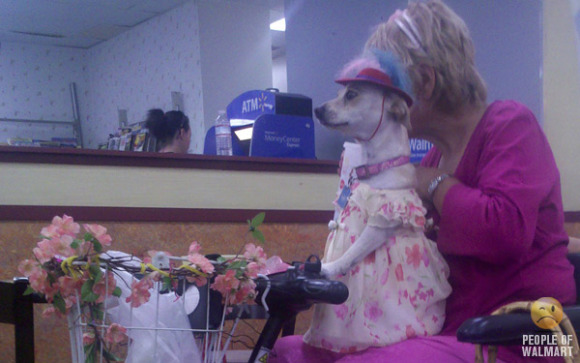 Some people treat their children like dogs, others treat their dogs like children. It all balances out in the end assuming the people involved are, well, balanced. We're not sure that's the case with the Magenta Menace here – her little dog looks paralyzed with fear, drugged into somnolence or both. What other dog sits that way, hmm? I see your dogmatic cat and raise you a catatonic dog.

Lean in a little closer (if you dare) and we'll bet you can hear the petrified pooch whispering “Call the police!” At least their mobility scooter's been dressed up with flowers, fake though they might be. Pity the pink perpetrator didn't confine her embellishments to inanimate objects. Scary, huh? This is nothing, just a casual outing to the local Walmart. Follow them home and things get really interesting or really creepy, assuming you're the type who finds creepy stuff interesting. Ever wonder what Elle Woods' life would be like if Legally Blonde didn't have a happy ending? Wonder no longer. 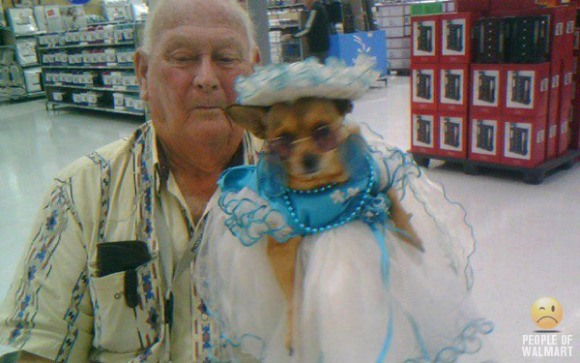 So David “Son of Sam” Berkowitz finally got parole, good for him, that's what a  few decades of good behavior will getcha. Wait, he's still in the slammer? Well somebody who looks rather frighteningly like him is saving money and living better of late in the company of one particularly possessive (maybe that should be “possessed”) puppy.

As for the dog herself... whew, Minnie Pearl has really let herself go! On the bright side, some plucky someone told her about that price tag hanging off her hat, which is nice considering it's been twisting in the wind since World War II was a coming attraction. 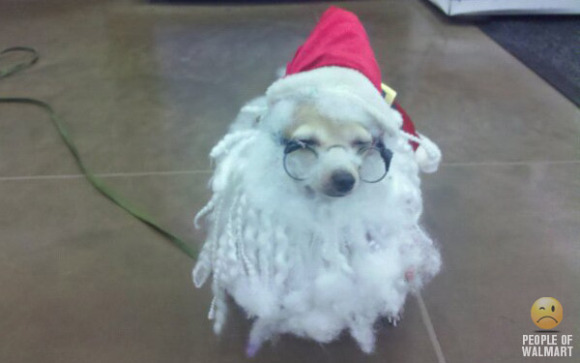 You'd have to be convicted of being criminally insane to (a) dress your dog up as Santa and (b) bring him to Walmart with you and... ah yes, we forgot about the Sanity Clause.

Seriously, getting into the holiday spirit does NOT mean getting your dog into a ridiculously oversized white beard and other screamingly scarlet Nicholassian accessories designed to be worn by a morbidly obese white guy. Are we being too hard on this pooch's unseen owner? Not to be a grinch but you know who else dressed their dog in seasonal apparel? 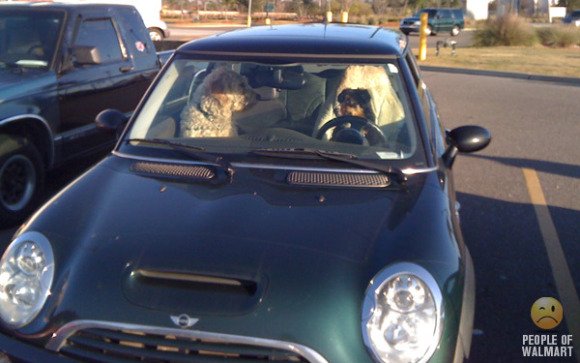 Call this a DUIA: Driving Under the Influence of Alpo. Actually, the owner's sleeping it off in the back seat after giving his car keys to the designated Doberman. As for the golden-haired poodle de jour in the passenger seat, c'mon... Dobey finally gets the car, he's gonna show the ladies around town!

Or around Walmart at least, and don't think he's a cheap date either. Have you seen Walmart's pet toys section lately? Well, have you?? Dobey should have rifled his dozing owner's wallet and hooked up a mini U-Haul to the mini Mini before picking up Fifi LeFemme. 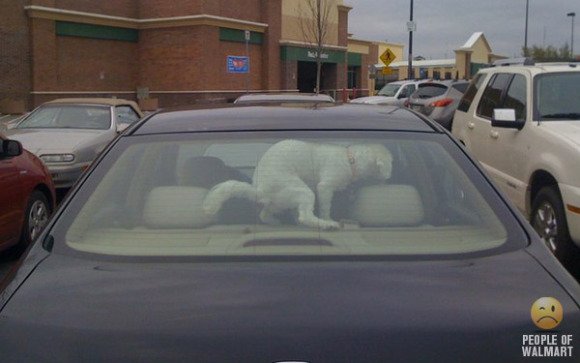 Locking one's dog in the car while the master/mistress goes shopping is NOT cool, OK? Then again, inconsiderate idiots do this to their children far too often so seeing a dog left alone in a parked car isn't all that surprising. What goes around, comes around however...

Just wait, neglectful pet owner, your dogma is about to make a mess of your karma – in it, actually, and at just the right time and place: under a broiling midday sun intensified by auto window glass, right on top of the package shelf. Hope you picked up a few of those rear view mirror pine tree car-fresheners, dude, 'cause you're really gonna need 'em. 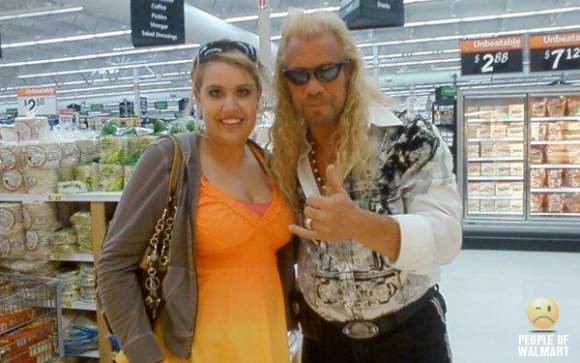 Not every dog you'll find at Walmart is a pet, of course, and the “Dog” above might not even be Duane Chapman, just a wannabe poser who's hunting for some Bounty paper towels and an easily duped date for the evening. Speaking of witch, er, which,  someone appears impressed though if Dog Juan impresses his pinkie much further there'll be one more mutt in the local pound.

Thanks and a tip of the cap to People of Walmart, the hard-working source of these too-real images you only WISH were 'shopped!

Have you seen 20 Brilliant Ways to Organize Your Cats?