While it's a well-known fact that pet owners can train their parrots to sing on key, there are a lot of other pets and animals in the wild who have been waiting in the wings to finally get their spotlight moment as well.  In combing YouTube for the best of the best, here are my top ten picks of pets I think are a cut above the rest. Yes, American (& Japanese) pets do have talent.

2. Billschannel posted a host of cats (described as "the biggest stars on YouTube) belting out "Auld Lang Syne"

3. This song was created by LaDiDa automation using only real wolf howls as audio input.

5. Singing Turtle or is he lip-synching?

6. A horse who may have taken his lead from Mr. Turtle above. Here he is singing (or lip synching), "Me and Mrs. Jones"

7. Geico's Ads are the best - and, here's one you may have missed. Mister Butters and his cockatiel friend harmonize well together for their rendition of A-Ha's 80's pop hit, "Take on Me"

8. Larry the Ostrich sings Opera at the LA Zoo for a whole 4 seconds.

9. At this Japanese Aquarium, three Beluga Whales sing for their supper. Also note the musical walrus trained to play a Swiss Horn.

10. Although not a real-life frog, since he's been part of the American landscape for the last four decades, gotta give props to Kermit the Frog's rendition of "Life's A Happy Song," accompanied by Bret McKenzie, who was taking time off from his duo comedy routines on HBO's "Flight of the Conchords."

Important to note that a full spectrum of species are known to produce songs. Many that use song or quasi-musical elements demonstrate that music is not unique to humans or mammals, and extend way beyond our feathered friends. So for those of you who have pets or animal friends that sing, and they weren't singled out in today's top ten list, please post comments with video links below. 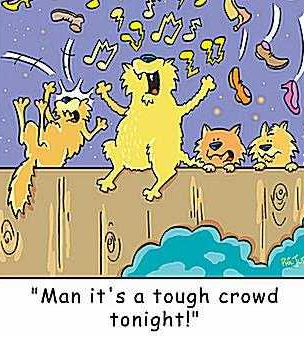