3 Most Popular Pets in U.S. Homes - The Latest Demographics

Which pets are the most popular ones in the United States?  Dogs and
cats, of course, but Number Three on the list just might surprise you.
And, of all of the various pets we have in our homes, which one reigns
as Number One?

Almost 73 million households in the United States have at least one pet, according to the 2011-2012 American Pet Products Association (APPA) National Pet Owners Survey.  That means that pet owners make up more than 60 percent of the U.S. population!

The survey results also confirm what has become fairly well known about the many benefits of having a pet; namely that pets, in addition to providing companionship for their owners, also help relieve stress and make a pleasant change to our otherwise daily routines.  People who have a close relationship with their pet also seem to live longer and healthier lives.  Those who suffer from depression or illness especially benefit.

Dogs top the list as the most popular pet in America, with 36.5 percent of all households owning a dog, according to the AVMA 2012 U.S. Pet Ownership and Demographics Sourcebook.  Cats are found in 30.4 percent of all U.S. homes.  And fish come in at a distant 6.5 percent.  Keep in mind, this ranking has to do with number of households owning at least one pet, not number of animals owned. 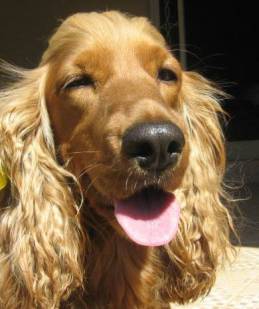 Dogs have lots of advantages as pets when
compared to other animals.  They are great companions, can make good
guardians (even if they just bark to let you know someone is at your
door or on your property), aren't too expensive to purchase,  especially
if you get one from a local animal shelter, and don't take a whole lot
of care.  But they do take more of a time commitment than most other
pets.

That commitment usually begins with house breaking them
and leads to regular walks, playing with them (hey, just throw a stick
or a ball and let the dog do all of the work) , spaying/neutering, grooming them, annual
check-ups with a vet , training them not to jump on visitors, keeping
them on the property, etc.  Many communities have laws prohibiting dogs
from wondering around on their own, which means you may have to fence in
your yard, install an invisible fence, or put Rover on a leash and wire
run when he goes outside.

Dogs are great with kids ... in
most cases.  There are particular breeds that have a reputation,
rightfully or wrongfully so, of having the propensity to attack and
cause serious injury to children.  There are other breeds generally
recognized for their gentleness.   Regardless, any dog that has been
abused or neglected may exhibit nasty aggression by snapping at and
biting a child.

As far as expenses go, unless you have to fence
in your yard, dogs are fairly inexpensive to maintain.  Dog food, a pet
bed or crate, a few doggy toys, annual license,  and yearly check-up
with the vet are about all that's required.   Not a lot to invest in a
pet that's going to bond with you like no other.  "Man's best friend" -- it's a title appropriately earned. 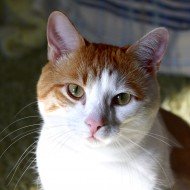 According to both the AMVA sourcebook and the APPA survey, cats are the second most popular pet.  They are affordable, especially if you get one from a shelter, which is what many cat lovers suggest you do.  Typically cats don't need much attention, but that doesn't mean they don't require commitment and care.  There is the matter of the litter tray to be dealt with regularly.  But, generally, you can leave them alone for the duration of the workday or if there are other obligations that take you out of the house or keep you otherwise occupied.

Cats usually make good pets for children.  Kittens are cute, inquisitive, playful and don't mind being carried around by kids.  As they get older, some cats still like to be held, some don't.  Some cats play with their claws extended and they will leave scratch marks on your hands and arms.  Some cats like to bite, even while playing.  Because of a multitude of bacteria in a cat's mouth, if the bite breaks the skin a serious infection can result.  You'll need to clean the wound immediately and then seek medical treatment with your physician, at a local walk-in clinic or hospital emergency room..

Cats typically have a lifespan of about 14 years.   Expenses include the usual items of food, kitty litter, visits to the vet for annual or semi-annual check-ups, spaying/neutering,  and occasional medical treatment for any ailments.  Compared to other pets, they are fairly low maintenance animals.  And, yes, they also are great companions.

If you look at just the numbers of pets owned,
freshwater fish, at more than 151 million, outnumber cats and dogs
combined.  Gee, no big surprise here.  You can house lots of fish in one
large tank.  Some of them may even get together now and then and
produce little fish, so you may end up with even more fish in the tank.
Not to worry, all fish eat other fish if they are small enough.  So,
unless you separate them, many of the little guys are going to get gobbled up by their larger
tankmates soon after arrival.

Beautifully
colored, gliding peacefully through clear water in a tank filled with
small gently waving aquatic vegetation, fish swimming around will almost
put you in a trance.  Unless, of course, the fish tank happens to be
located in your dentist's office, where the high-pitched whine of a
drill in the background will snap you back into reality quicker than a piranha slurping up
a goldfish. 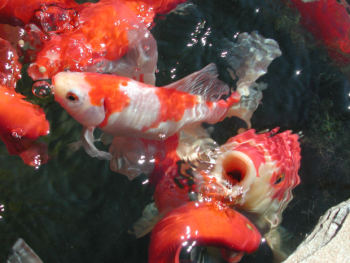 be an attractive
addition to almost any room in your house.  They are a popular choice for a pet
because most fish are fairly inexpensive to purchase and to feed and
maintain.  You do need to keep a correct water temperature for them and
the tank should be cleaned when necessary.  There are even fish you can
buy that will help you keep it clean.  And the space fish need is only
as large as the tank you keep them in, as opposed to much larger pets.

On
the downside of keeping fish as pets, Gilda and Finn aren't going to
bond with you.  If you're looking for a pet that will come when you call
it, do tricks for you, or just serve as a companion, fish obviously aren't going
to fill any of those needs.  Yes, they will come to the top of the tank
and blow bubbles at you when you feed them.  This has nothing to do with
the fish liking you.  They're instinctively reacting to being fed.

NUMBER OF PETS VS. NUMBER OF HOUSEHOLDS WITH A PET

When
it comes to  counting the actual  number of pets versus the number of
households with a pet, cats actually outnumber dogs by about 74 million
to 70 million.  These  numbers and those in almost all pet categories
have gone down in the last five years, according to the AVMA sourcebook.  Why is this the case?  Probably a major factor has been the nation's sagging economy.  People simply don't have the money it takes to care for a pet.  Other speculation blames the decline on the shrinking number of traditional families.   Single parents struggling to work and maintain a household, children involved in a bunch of out-of-the-home activities, an aging population, and more, all help contribute to a decrease in pet ownership.

Okay, so if those are the top three most popular pets in the U.S., what are some other pets in terms of their popularity?  The AVMA lists birds as fourth on the list, followed by livestock (at about 11 million), followed by horses (more than 7 million).  If you're interested and would like a whole lot of great information about pet rankings and much more, the 2012 AVMA sourcebook is available online (PDF download for nonmembers is $295) and as a softcover book for nonmembers is $315.