They say there's nothing new under the sun, but just because something's
been around forever doesn't mean we know about it. 2012 was a banner
year for animals being newly discovered, newly re-discovered, and newly
described. Let's count down the 10 most interesting wildlife finds of 2012:

This discovery is a little hard to talk about, since it doesn't have a name yet, but a new species of shrimp was found in 2012, in a cave pool in southern New Mexico. These newly-discovered shrimp are blind, about half an inch long, and nearly translucent. The fascinating thing is that they have probably been there, just 80 feet or so below the surface, for thousands or even millions of years; people just never noticed them before. Agents from the Bureau of Land Management found them in a water sample taken as part of a biological survey required before more potash mining could be done in the area. The BLM says it is working on a plan to balance protecting the new species with developing the region's potash resources.

In case you have been sleeping too soundly at night,rest assured that a new species of large spider was discovered in 2012. The trogloraptor, or "cave robber" spider, was found in (where else?) a cave in Oregon. 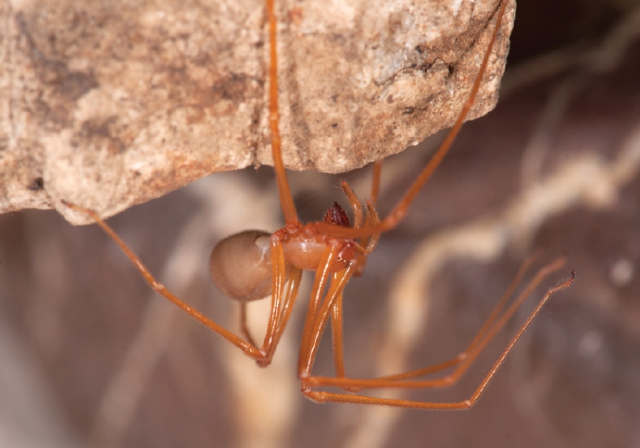 These spiders are about 4 centimeters wide (a little bigger than a half dollar) and have mean-looking claws: 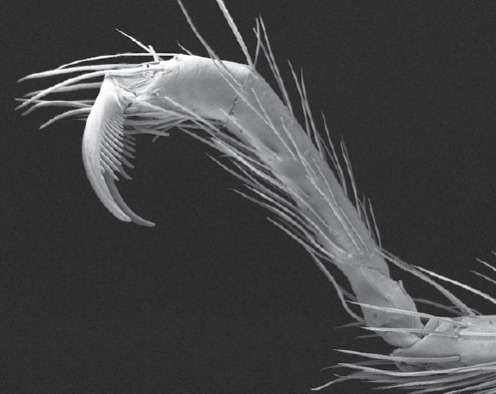 Scientists don't yet know how those claws are used or what, exactly, the newly-discovered spider preys on.

Scientists had to go to the fossil record for this one, but it's still a fascinating find. Researchers examining the Burgess Shale rock layer of the Canadian Rockies spotted a cluster of tulip-shaped fossils. 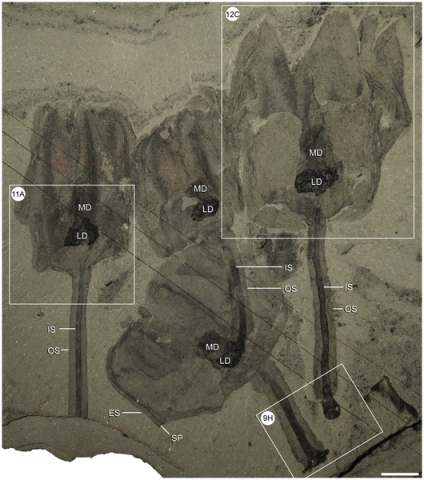 A closer look revealed that these fossilized creatures had digestive systems and were thus animals, not plants. Sisphusauctum gregarium was a filter feeder that lived about 510 million years ago.

Phallostethus cuulong was first spotted in 2009, but not fully described and named until 2012, perhaps because scientists were just so shocked. You see, both the males and the females of this species have their sex organs on their heads, just behind their mouths.Here's a video that shows what these little fish look like. Be forewarned: the newscasters reporting on this story could not resist a few crude jokes.

As for why these unusual fish weren't seen until recently, it may have something to do with their habitat. They live in the brackish waters of Vietnam's Mekong Basin, an area that has undergone heavy development (and therefore heavy pollution) in recent years. It may be that biologists neglect to study these types of places because they are just so unappealing to work in.

Here's another unusual animal just admitted to the scientific lexicon in 2012. Paucidentomys vermidax is a shrew rat living in Indonesia. Unlike its rats brethren, Paucidentomys vermidax has no molars, only two large incisors, which give it a buck-toothed appearance. This rat feeds on earthworms and has very little need to chew.

In a fit of whimsy, scientists named a deep-sea acorn worm discovered in 2012 for Yoda, the little green Jedi master from Star Wars. Here's a video which points out the resemblance between the two:

The Yoda purpurata, or "puple yoda" worm, was found 1.5 million miles beneath the surface of the Atlantic Ocean, along the mid-Atlantic ridge. This worm and two other new worm species were discovered using a remotely operated submersible vehicle during the ECOMAR research project.

Deep in the caves of Venezuela, a BBC film crew discovered something sure to fascinate you (and creep you out): a cricket with a number of novel features. First, a fascinating one: it can swim. A biologist on the expedition described it as "the most unbelievable thing" he'd ever seen and added, "It swims underwater and uses it's front legs as a proper breaststroke and its hind legs kicking out." Now, the creepy feature: it has a taste for flesh and is probably the top predator in its environment. It reportedly almost ripped one researcher's thumb off. Visit the BBC's site to see video of the discovery.

This discovery is not a brand new animal per se, but it is an animal that is (sort of) back from the dead. The New Guinea singing dog is a type of wild dog long thought to be extinct outside of captivity. As of last year, only about 200 individuals, all living in zoos or as pets in private homes, were known to exist and no one had seen a singing dog in the wild in 23 years. 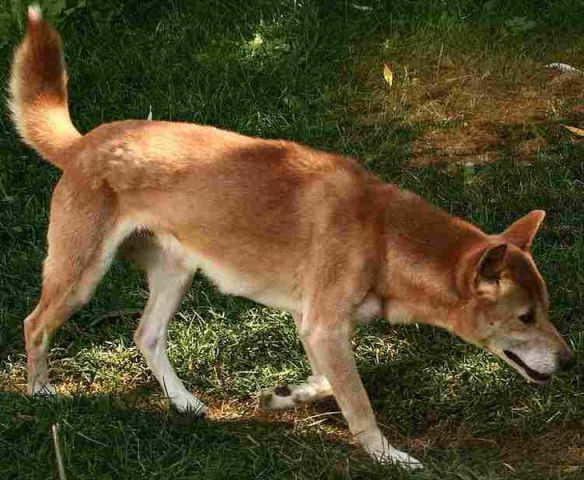 All of that changed when a group of hikers in Mandala West Papua, Indonesia spotted and photographed one in September of 2012. This photo, which can be seen here, is a matter of some dispute, but many experts believe it is in fact an image of the rare singing dog.

Singing dogs are so named because of their distinct howls. Groups of these dogs will sometimes participate in chorus howling, in which one dog starts and the others then join in. The resultant  "song" is somewhat eerie sounding and ends on a high note. Play this video to hear it for yourself:

Groups dedicated to the preservation of the singing dog are hopeful that this canines do still exist in the wild, so that new bloodlines can be introduced into a breed with dwindling genetic diversity.

In 2012, scientists  confirmed that an unusual monkey found in the Republic of Congo is, in fact, a distinct species. This species wasn't discovered in the usual way. It wasn't spotted in the wild; it was spotted in a yard. It was a little girl's pet. American scientists working in the Congolese forest saw the pet monkey when they were stopping in town. They were immediately struck by its unusual features: a pink face, a golden mane, and human-like eyes. 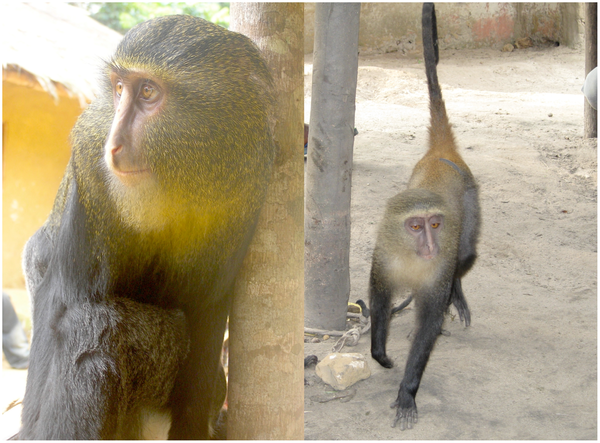 Apparently, this creature was well known to the locals, but not to anyone outside the area. Field teams were dispatched to collect specimens and after exhaustive research, it was confirmed that these monkeys are a distinct species, unlike any known before. The new monkey (locally known as "lesula") has been dubbed Cercopithecus lomamiensis. Conservationists hope it will become a poster species to encourage the preservation of biodiversity in the Congo.

And finally, in what might be the most surprising find of 2012, scientists discovered a new, tiny species of frog. It is the world's smallest known vertebrate. Check it out: 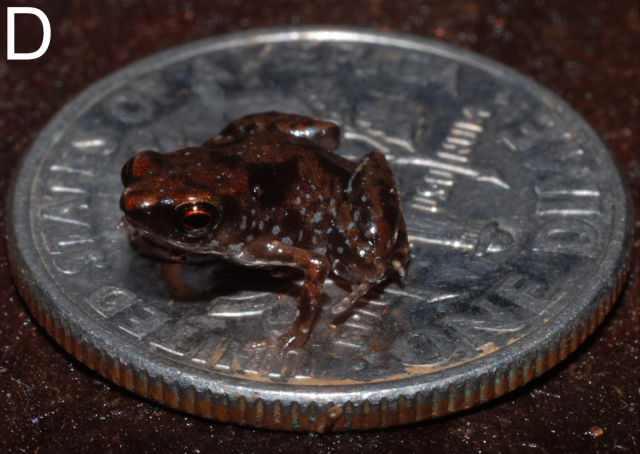 Just to be clear: the coin the little frog is sitting on is a dime.

Paedrophryne amanuensis was found in the rain forests of New Guinea. In a press release about the discovery, Christopher Austin of Louisiana State University stated: "Little is understood about the functional constraints that come with extreme body size, whether large or small... It was particularly difficult to locate  Peadrophryne amanuensis due to its diminutive size... But it's a great find. New Guinea is a hotspot of biodiversity, and everything new we discover there adds another layer to our overall understanding of how biodiversity is generated and maintained."

Found out in the open or deep in the forest, just under foot or far beneath the sea, these amazing newly-discovered animals illustrate just how wild and wonderful our world really is. May 2013 bring us even more exciting wildlife discoveries!