Biomimicry Of Tiny Fly Will Lead To More Powerful Antennas

Don't tell a male cricket this, but his mating call is responsible for attracting more than a mate; it attracts a parasitic, pregnant fly called the Ormia ochracea.  Other flies would not hear the crickets, but the Ormia ochracea has unusually acute multi-directional hearing that a University of Wisconsin, Madison (UW-Madison) researcher wants to biomimic in a powerful way. 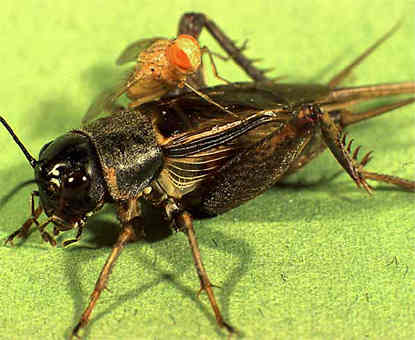 Ormia ochracea is the yellow fly on the cricket's back. She will lay her eggs around and inside the cricket. which will then kill the cricket when they hatch: image via server.carlton.ca

Nader Behdad, an assistant professor of electrical and computer engineering at UW-Madison, received a faculty award and a National Science Foundation grant to discover how to make small satellite and radar antennas that are multi-directional. Small is the operative word, as small antennas are much more powerful than large antennas.

Looking to nature, Behdad began by studying the human auditory system which is pretty good at directional hearing. "We're like a large antenna," Bedad says of humans. Very large, compared to the antenna of an Ormia ochracea, which Behdad eventually discovered after investigating the hearing of smaller and smaller creatures.

Bedad's goal is to develop super resolving antennas  that mimic the extremely sensitive hearing of the Ormia ochracea.  These antennas could result in significantly more wireless bandwidth, better cell phone reception, and contributions to other consumer electronic areas.  Other benefits would include advancements in radar and imaging system technologies.

Behdad has designed a 'proof-of-concept antenna" (similar to a prototype), but he says his group still needs to understand the physics of the Ormia ochracea.

As part of Behdad's faculty grant, he will be developing courses to teach undergraduate and graduate students, as well as K-12 teachers, about using biomimicry to solve a variety of engineering problems.

Dolphins Got A Ticket To Ride, But At What Cost?
Comments