Time To ’Paws & Relax’ On Your Next British Airways Flight 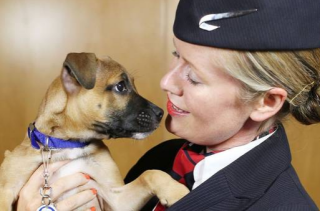 Channels. It’s a trend, with legs (pun intendend) that spawned such social media sensations as ‘Grumpy Cat,’ ‘I Can Has Cheesburger, ’Keyboard Cat,’ ‘Alex, the Parrot,’ ‘PawNation,’ ‘Crasher Squirrels,’ ‘Caturdays,’ and tons of dog and cat memes.

So, is it any wonder that one of the world’s largest international airlines would seize on this phenomenon to add a new value-add offering for their passengers? While the friendly skies have long been known for welcoming pets on certain airline flights - to the point where Pet Airways actually developed a niche business model catering to them — British Airways’ latest feature targets those passengers who are pet enthusiasts flying without their best friends.

Starting with BA’s long-haul flights next month, the airline is introducing an in-flight entertainment channel appropriately titled, ‘Paws & Relax.’ The idea is to provide visuals of cats and dogs doing what they do best - looking adorable.

service by indicating, “there's lots of research to suggest that watching pets can enhance overall wellbeing."

The curated shows will include cartoons, as well as cats and dogs at play. Additionally, the  programming initiative is aimed to sooth and entertain children who can become restless from the strain of long distance flights.

Last month, the airline launched a new genre of "Slow TV" on board flights, including an unedited seven-hour Norwegian train journey from Oslo to Bergen. While I’m sure there’s an audience for this type of programming - I think even train enthusiasts would choose a cat or dog video over a slowing moving train - don’t you think?

Flying Dragon! The Animal Video Of The Day!!!

Wake Up! The Animal Video of the Day!!!
Comments