Tilly was a shy and terrified cat when Celia Haddon found her at the
shelter. She was also a bit odd looking wit,h a "harlequin" face that was
half black and half tortoiseshell. It kind of made sense that no one had
bothered to adopt Tilly in the 18 months she had been at the shelter.
Haddon decided to take a chance on her anyway. It was one of the best
decisions she ever made in her life. 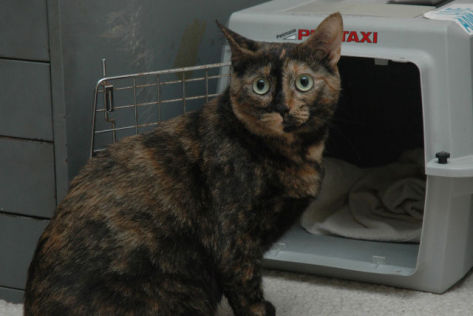 In 2010 Haddon, 66, just finished a degree in applied animal behavior, and was keen to put her new skills into practice. So she thought Tilly would be just the animal to benefit. She had serious doubts that she would be able to love such a difficult cat, but since the idea was to work with the feline in a detached, scientific way that part didn't really matter.

Tilly was just four months old when  rescued from a barn where she had lived with other cats. The poor thing was sick and covered with flea.  That was all Haddon knew about her new house mate.

If Haddon could teach her to like and accept humans then she would stand a much better chance of being adopted into a proper home. Of course, there were a few mountains for the two of them to climb together first.

One of the first hurdles was Ronnie, Haddon's husband of more than 40 years. At 84, he was in hospital for prostate cancer. Her worry over him was already keeping her up nights and Tilly was likely to make this worse.

Once home, Tilly went racing to hide under the bed in the spare room. For a couple of days the food went uneaten and the litter box went unused. On the third day the food had been eaten and the box used -- most likely out of desperation. On the fourth day Haddon got down and rolled a few cat treats in Tilly's direction -- to no avail. The cat wouldn't touch them. It seemed to be a step back.

Haddon decided to go a different direction with Tilly. She stopped all attempts at trying to establish a relationship. From what she had learned it could take several years to tame a feral cat and she wasn't sure that she had the patience.

Tilly was still playing the invisible cat when Ronnie came home and was installed in a downstairs bedroom because he couldn't manage the stairs. The cat hid herself upstairs to be safely away from this new intruder.

A couple of weeks later they started to notice evidence of Tilly making nightly forays around the house -- upturned wastebaskets and shredded bits of newspaper. Ronnie said she was a little vampire cat who would only come out at night.

Haddon started realizing that Tilly was watching her in the night too. It was unnerving having a silent little stalker and she started wondering if the cat was considering attacking her. At the same time Tilly started making noises in the night -- tpaws on the stairs, the rustle of paper, and the occasional thump.

It was time for Haddon to test her feline houseguest. She started leaving balls of newspaper about before bedtime to see if Tilly would take notice. By morning they would be in different rooms. The cat was playing! Even though still frightened and lonely, Tilly was finding ways to enjoy herself.

Then came shy overtures. One night, while Haddon was reading in bed, she noticed Tilly sitting in the doorway staring at her. She did nothing about it and the cat retreated. The next night Ronnie felt his toes tickled. He sat up and saw a furry little face staring at him. Again she retreated.

For two months she was only occasionally visible and Haddon started to lose hope. One night Tilly came into the bedroom to stare at her again. Then, to Haddon's surprise, the tiny tortie rolled over on her side. It was an invitation to come and play. Yet again, Haddon didn't make a move toward the cat. Soon Tilly  walked off, but she left Haddon with a ray of hope.

She tried to connect with Tilly, but the cat was still too scared. So Haddon did the opposite. She started going the other way when she saw Tilly. If she had to pass the cat she would sidle by with her back to the cat and avoiding eye contact.

The idea worked. Tilly felt less threatened and allowed the distance between them to become smaller and smaller. Finally there came a day when Haddon was lying on the floor that Tilly came and took food from her hand.

Tilly's body language changed and she would walk rather than slink around the house. One day Haddon found her sleeping on, rather than under, the bed in the spare room. One night while Haddon was watching television and Tilly got up next to her. Without thinking Haddon started to pet her. Tilly started purring loudly and Haddon suddenly realized how much she loved the cat and there would be no more talk of putting her up for adoption. 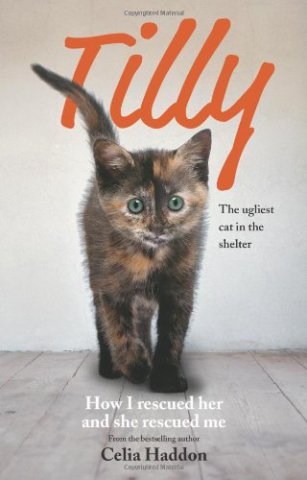 Tilly, the Ugliest Cat in the ShelterAs Tilly grew stronger, Haddon felt herself grow weaker. When Ronnie was in the hospital with a lung infection that nearly killed him, Tilly started sleeping on the bed with Haddon. The woman would wake filled with anxiety, pet the cat for a bit, and then be able to sleep again. As soon as Ronnie came home she returned to her old sleeping habits.

Then Haddon was diagnosed with cancer. So she was faced with dealing with her own health crisis as well as Ronnie's. Tilly seemed to sense the change and started being more loving than ever. She would rub her face against Haddon's and Haddon, in return, felt that her greatest support was in the wordless love of a little cat.

After a mastectomy and coming home to a husband who wasn't eating, Haddon found herself in despair. In the wee hours one morning she was a wreck, sitting on the couch and trying to calm herself. Tilly jumped into her lap, curled up, and went to sleep. Haddon felt all of her anxiety melt away. With the new found calm she was able to find the resolution to give Ronnie the best life possible for the days he had left. The feeling remained long after dawn broke and Tilly moved on with her day.

Haddon felt that she may have rescued the craziest cat in Oxfordshire, England, but she felt that that same little cat rescued her too. She penned the full story in a book -- "Tilly, the Ugliest Cat: How I Rescued Her and She Rescued Me."

To order a copy of Celia Haddon's book, click here.