Therapy Dogs Are Not Too Cool For School [Videos]

A therapy dog is a canine specifically trained to provide affection and comfort to people in hospitals, retirement homes, nursing homes, hospices, as well as people with learning difficulties, and those in stressful situations, such as disaster areas. But what about the traditional stress that plagues college students every year, the world over, particularly when exam time rolls around? 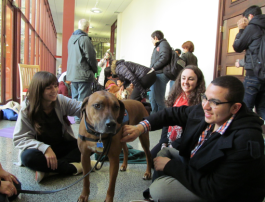 “Stress levels rise around finals time on college campuses every year, and there’s research that shows that using animals in a therapy setting has multiple benefits, including reduced stress and reduced blood pressure,” said Jacqueline Frank, library commons assistant at MSU who started Paws to de-Stress this semester.

Differing  from 'service or assistance dogs,' therapy dogs do not accompany their owners, nor are they legally protected at the federal level by the American Disabilities Act of 1990. Instead many organizations provide testing and accreditation for therapy dogs. In the United States, some organizations require that a dog pass the equivalent of the American Kennel Club's Canine Good Citizen test and then add further requirements specific to the environments in which the dogs will be working.

Therapy dogs assigned to campuses during midterm and final exam weeks are often referred to as "Therapy Fluffies," a term coined by Torrey Trust, the original founder of the UC San Diego therapy do de-stress event that kicked off at the university during the spring quarter final exams week in June, 2009. Last year the same program was featured at the UC Davis campus which included add-on services of free massages and relaxation biofeedback.

its friendly and specially-trained canines  to Fondren Library.

"Therapy dogs have been in use at certain university libraries for a number of years, and we felt it was time to offer this chance to our Rice students," said Kerry Keck, assistant university librarian for research services. "We hope taking a break with a friendly dog will provide a positive outlet during the stress of finals. If our student feedback is positive, we'll plan to bring the pups back next year."

So if you're a student at a college or university that is not conducting a similar type of initiative, you might want to check with one of the schools mentioned in this article to kick-start you're own program. Also the National Therapy Dog Registry is an online resource that can help you locate one of the many pet associations involved in these types of campaigns.

By their companionship alone, therapy dogs can reduce one's blood pressure, slow heart rates, accelerate healing, and provide immeasurable comfort during periods of anxiety. . . after all, there was a reason they were given the name: "man's best friend." 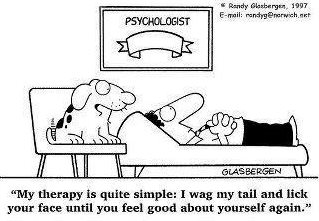 What Are Toroidal Vortices? The Animal Video of the Day!!!

There Are Still Nice People In The World -- The Animal Video Of The Day!!!
Why Bovines Shouldn't Drive: Fun Animal Video of the Day!
Comments