Animal communication is one of the most non-traditional ways of solving your pet's behavior problems, never-mind resolving illnesses, but people who have worked successfully with a pet 'telepathist,' swear by it, and some end up going into the field themselves.  That's how it started for Deborah Poynter, Animal Communicator and Healer. 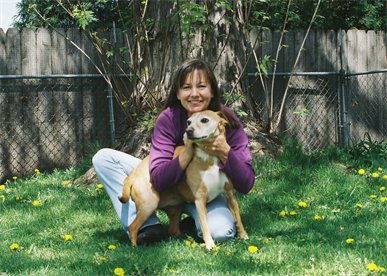 In 2005, Poynter contacted an animal communicator when her own dog, Cinnamon, became ill, and that telepathist, Asia Voight learned things about Cinnamon that she could not have known any other way but somehow receiving messages from the dog.  Poynter then spent 60 hours studying under Voight, and many more reading up on the subject, learnng how to use her own telepathic sense to communicate with pets.

She says telepathy is a sense we all have; it's a fundamental method of communication that we don't use as often as we should.  We're out of practice.  But for animals, telepathy is their main form of communicating with humans; and most of us aren't sensitive to it.

Though Poynter admits that it's difficult to communicate with your own pets telepathically, because you are never sure if you are 'hearing' what you want or hope to hear, she says she can read other peoples pets because she is not attached to them in the same ways.  Poynter's clients send her a picture of their pet and at a previously appointed time, Poytner will communicate with the pet over the telephone.  Her clients rave about her skills, judging from her testimonials. She's worked with about 200 pets since 2006, and pet telepathy is only a part-time job!

Poynter's clients call from all over the country with concerns about their pet's health or behavior problems, usually when traditional methods of healing or training have failed. For more information about Poynter's services, visit her website.