Teen Bitten By Snakes For Want Of A Cell Phone Signal

Earlier this month, a 16-year-old California girl, went in search of a
cell phone signal while staying at her uncle's house east of San Diego.
She had climbed a hill behind his house when she suddenly realized that
she 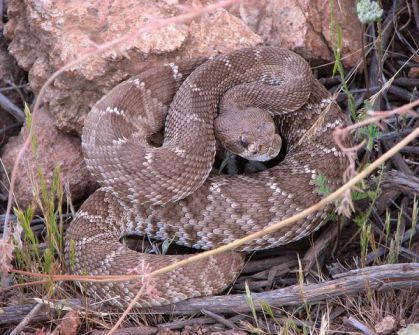 Rattlesnake (Photo by Rsduhamel/Creative Commons via Wikimedia) could hear the rattling sound all around her. In a panic she ran,
accidentally running right into a nest of  rattlesnakes.

After being bitten six times Vera Oliphant hobbled back to her uncle's house as her entire body began to swell up and she found herself in intense pain. Her uncle rushed her to the hospital where she spent four days in intensive care fighting for her life.

While she is lucky to be alive, it will take several more weeks for her to recover fully.

The doctor who treated Vera said that the most important thing when bitten by a rattlesnake is to get to the emergency room as soon as possible. When it comes to this type of snake bite the standard first aid for snake bites does not apply -- so no tourniquets or suction. Just stay as immobile as possible and seek help immediately.