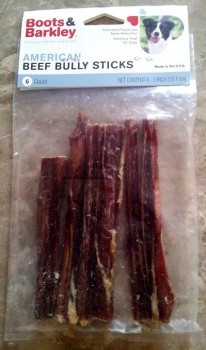 Boots & Barkley American Beef Bully Sticks (this package recalled): image via FDAA voluntary recall has been issued by Kasel Associated Industries for one of its Boots & Barkley packaged products sold at Target Stores nationwide, after salmonella bacteria was found in one size of the company's bully sticks by the Colorado Department of Agriculture.

The Department found salmonella in four lots of one size of the Boots & Barkley American Beef Bully Sticks sold at Target Stores between April and September, 2012.  The lots are: BESTBY20APR2014DEN, BESTBY01JUN2014DEN, BESTBY23JUN2014DEN, and
BESTBY23SEP2014DEN.  Those who have purchased these lots from Target Stores should stop providing them to their dogs, and return them or their remains to Target for a full refund.

People are often more at risk for salmonella infection than animals, particularly babies, the elderly, and others with compromised immune systems. Most commonly, humans get salmonella by touching the salmonella-infected product and not washing their hands immediately afterward.  In the meantime, during their normal behaviors, they may be rubbing their eyes, eating food with their unwashed hands, or doing other things with their unwashed hands that come in contact with their immune systems.

Symptoms of salmonella infections in humans include nausea, vomiting, cramping, and high fever.  Severe cases can affect one's organs and extremities, and muscle pain and weakness may be indicative.

Pets can experience the same symptoms as humans, but healthy pets are less likely to show symptoms of the salmonella infection.  Nevertheless, they can pass the bacteria along to other pets through drinking water and feces. At any sign of infection in your pet, he should be seen by a veterinarian.

If you have questions about the product, Kasel Associated Industries invites you to call at 1-800-218-4417.

Source: CBS News  Related Read: The Diamond Food Recall & What To Do About It

Gardeners Coexisting With Deer
Gerbils As Pets, Tips For Keeping Them Healthy And Happy