Sad news came out of Japan this week that Tama, the feline stationmaster
for the Wakayama Electric Railway's Kishi station has passed away. The
calico cat had taken up the post after it was noticed how much the
little stray enjoyed meeting people who arrived at the station. Making
her stationmaster saved the financially strapped Kishigawa Line from
being closed. 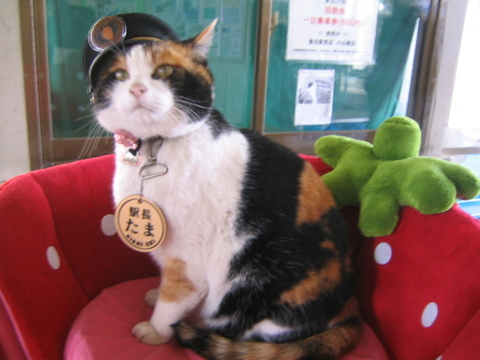 Tama the Railway Stationmaster (Photo by Sanpei/Creative Commons via Wikimedia)

PetsLady first introduced you to Tama back in 2012 as a "fashion icon," (to read the original article, click here). At that time she was referred to as the 10 million dollar cat for the amount of revenue she had managed to earn for the company. She reputedly boosted ridership on the railway by hundreds of thousands of passengers -- many of them coming just to get to meet her. This also gave a huge boost to the local economy with sales of photos and merchandise. While this may sound strange to some people, the Japanese are well-known as cat lovers and often travel to visit cat and other animal venues on their vacations.

Tama died of heart failure on June 22 and when the news got out an impromptu shrine of photos, cans of tuna, flowers, and other gifts sprang up at the station. Shrine is the real word for it too. In the Shinto religion there are many gods, including animals. At the funeral on Sunday Tama was made a goddess of the Shinto religion. She was also given the title (after rising from stationmaster to super stationmaster, to director of operations, to vice president over the years) of "honorable eternal stationmaster." 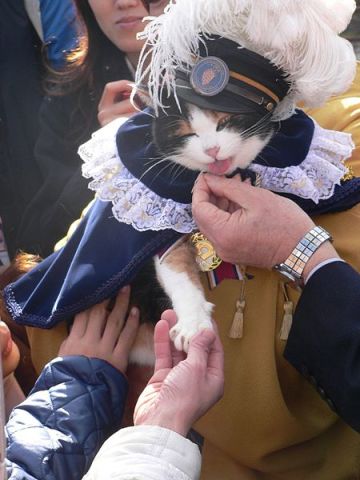 Tama the Railway Stationmaster (Photo by Takobou/Creative Commons via Wikimedia)

President of the Wakayama Electric Railway, Mitsunobu Kojima, thanked the cat for her achievement, her service to the company, and then said Tama will be enshrined at a nearby cat shrine next month.

The station won't be without a stationmaster. Nitama, another calico cat who has acted as apprentice stationmaster, is expected to be promoted into the position left open by Tama's departure. I hope Nitama knows what large paw prints she has to fill now.

Sayonara Tama. We will miss you!