They say 'every dog has his day,' but with a name like "Butkus," one has to wonder how a dog could be sold one day, only to star in one of most iconic movies of all time, the next. But such is the case. Like his master, Butkus paralleled his master's 'rags-to-riches' story to live in the lap of luxury for the majority of his life.

Desperate for cash and unable to feed his best friend, a bull mastiff dog named Butkus, he decided to sell his beloved pooch at the local liquor store.

One week later, when Stallone got the green light on his movie, he pleaded for his dog back. "When I sold the 'Rocky' script, I went to see Little Jimmy and begged for the dog back," said Stallone. But Jimmy held firm by responding: "Oh my kids love the dog." To which Stallone angrily replied: 'You've only had him for one f***ing week.'

"He wanted to fight me and said he was gonna kill me - he was a crazy little person. I couldn't fight him - they'd arrest me - so I offered to pay double. Anyway, $3,000 and several threats later..."

The 66-year-old actor went on to cast Little Jimmy in Rocky.

He explained to Shortlist magazine years later: "I ended up putting him in the movie. Do you remember in Rocky where the little guy goes, 'Hey, did ya win?' and I go, 'What are you, deaf?' and he goes, 'No, I'm short.' That's him."

Stallone recalls his time with Butkus fondly. “We got him when he was about six weeks old,” the filmmaker said. “He was a ferocious-looking little devil and when he ate his security blanket we decided to name him after Dick Butkus, possibly the fiercest football player in history."

Butkus who also went on to star in "Rocky," and "Rocky II" truly lived a life most dogs could only dream of. Stallone noted that his airfare cost a small fortune. “I kept promising him that if we made the big time, he’d always go first class."

He also proved be a good actor as well. “The most incredible thing [Butkus] did, and there are witnesses who’ll 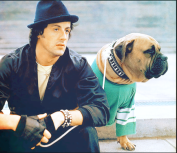 Rocky & Butkus back me up, is related to his ability to take acting direction. "I pointed a finger at him and went ‘bang bang.’ On cue, he did one of the best death scenes in history. One leg folded, then another. He finally slumped to the floor, did a little writhing, then rolled on his back and stuck out all four legs straight in the air. It was brilliant!”

Butkus died before Rocky III started filming in 1981, but like his master lived a true rags-to-riches storyline, and it was anything but a dog's life! [Oh, and in case you were wondering the Rocky franchise (all 6 movies) according to Wikipedia has grossed over $1.1 trillion dollars - now, that's a lot of dog biscuits.] 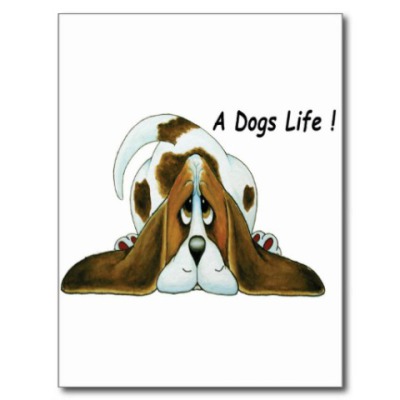 Meet Lil Bub -- The Tiny Celebrity Cat Video of the Day!!!
A Live Sand Dollar! The Animal Video Of The Day!!!
Comments