"Survivor" Has Nothing On This Cat

Sam, the cat, is the only one who knows what he went through last week
to survive a car crash, the destruction of his carrier around him, and
two days alone in the Everglades. With a plethora of snakes, alligators,
and turkey vultures around him, Sam may have just used up eight of his
nine lives to await his rescue. 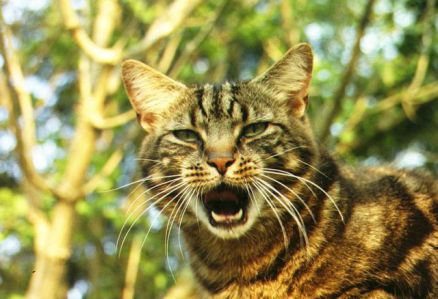 On Monday, July 16, Sam was travelling along Interstate 75 in Florida with his family. They were moving from California to Florida when the minivan collided with another car and then hit a tree. The 11-year-old Sam was in his carrier which was ejected from the minivan. It had crashed through the window and been destroyed. It was apparent that Sam had instinctively run for cover. His family was rushed to the hospital for treatment, having to leave him behind.

Sam's family was devastated that their favorite "napping buddy" had been left behind, especially after their dog had died last year. Word of his disappearance spread quickly and animal advocate Camilla Loge posted the news on Facebook and Craig's List.

Kathleen Sullivan, of the Brigid's Crossing Foundation cat sanctuary, and her husband drove out to the crash site on Wednesday. They found Sam waiting in the bushes near the accident scene.

Once Sam's family is settled, Loge plans to drive him to Miami for what is expected to be a very happy family reunion.

Pet Food, Is It Harming The Environment?

Get Clipped With These Animals
Comments