The Survival Of Cute: Hedgehogs On The Decline

The little mammals that are named for living among the hedgerows in
Great Britain are in serious decline. The number of hedgehogs has
declined by more than one-third over the past decade. This is largely
due to the loss 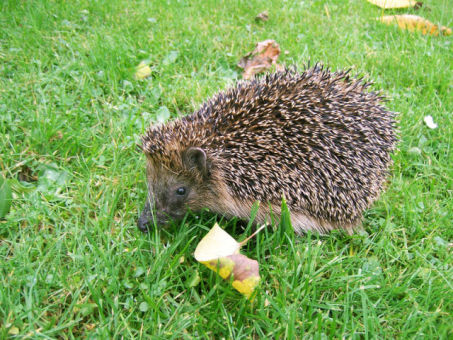 Hedgehog (Photo by Jürgen Howaldt/Creative Commons via Wikimedia) of those hedgerows, as well as other habitat areas.
Pesticides have also reduced the amount of prey that hedgehogs are able
feed upon.

Experts are looking to gather additional data on the hedgehog and are looking for volunteers to help them gather this data. The Hedgehog Hibernation Survey starts on Friday, February 1 and runs until August 31.

In 2012, over 2,000 people counted 45,000 hedgehogs. Due to the unusual weather patterns happening last year the results were confusing, so the survey is being conducted again this year.

The first hedgehog survey was completed 40 years ago and suggested that there was a link between climate and when hedgehogs come out of hibernation. It showed that the animals in colder regions of Great Britain hibernated up to three weeks longer than in the warmer areas. It also showed that some younger animals and lactating females went into hibernation later in the year in order to increase the fat stores they would need to get them through the winter. Mild winters cause the animals to waken early, changing such things as the breeding cycle, and potentially impacting the survival of the species.