The Sun's Goin' Come Out Tomorrow For Annie's New "Sandy"

The backstory on "Little Orphan Annie" actually took its name from the 1885 poem, "Little Orphant Annie" by James Whitcomb Riley. The original tale revolved around the adventures of a plucky but optimistic waif who knew how to stand up to bullies. The mutt "Sandy" entered the comic-book story a number of years later when Annie rescued him from a gang of abusive boys in the mid 1920s. 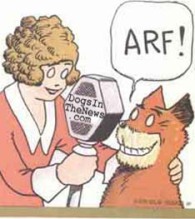 Annie & Sandy in 1925Flash forward some 8 decades later, and "Sandy" is being rescued once again. . .  this time from the possibility of euthanasia at a hard-knock animal shelter in Houston, Texas. That's right, William Berloni, the award-winnning animal trainer in charge of casting the role for the latest Broadway musical version of "Annie" which will begin previews on October 3, 2012 - selected "Sunny," a terrier-mix, in a nationwide search to become the next "Sandy."

“Something about her picture appealed to me,” said Berloni. “We already had three other candidates, but 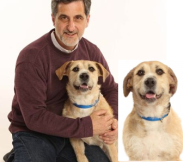 William Berloni with Sunny & Caseywhen I met Sunny I thought she’d be a great fit. She’s outgoing, friendly and eager to learn.” Sunny's understudy, Casey, was also rescued from a shelter near Nashville, Tennessee.

Over the years, Berloni has trained all the Sandys, as well as numerous other animals for the stage and screen. He particularly likes to check out shelters for all the dogs he casts in shows and movies, including Toto in "The Wizard of Oz" on Broadway and Bruiser in the "Legally Blonde" films. It all started when he was charged with casting Sandy for the very first production on Annie back in 1977.

“Somebody told me they had cheap dogs at the pound,” Berloni told ABC. “When I saw the conditions they were living in, I was profoundly moved. So I made a promise to myself that I would only get rescue dogs from then on.”

The journeys of Sunny and Casey from life in shelters to the bright lights of Times Square will be documented in a 30-minute TV special, "Annie's Search for Sandy," set to air on NBC in October. The special is being produced by Al Roker Entertainment and ANNIE Broadway LLC and is sponsored by PEDIGREE.

Lillia Crawford & Sunny star in new "Annie"Sandy has had an illustrious career. First appearing in the early comic strips in 1925 exclusively in the Daily News, cartoonist Harold Gray, who created the character, drew him and Annie until his death in 1968. Over the years the pair starred in a radio series in the 1930s, made a Broadway debut in 1977, and a $35 million movie in 1982, with Aileen Quinn and Carol Burnett. And on November 8, 2012, Sandy and Annie (played by Lillia Crawford) will bark his way back into our hearts at the New York Palace Theatre (1567 Broadway at 47th Street). Leapin' Lizards, that's only a few tomorrows away!