Study Results: Why Rudolph Has A Red Nose

Scientific research into a herd of Arctic reindeer is showing evidence
of the possibility of the animals actually having red noses, and not
just from drinking too much eggnog. Researchers in the Netherlands and
from the 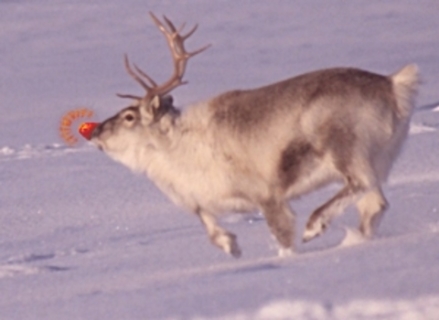 Rudolph the Red-Nosed Reindeer (Photo by Lomvi/Creative Commons via Wikimedia)University of Rochester in New York examined and compared the noses of a
couple of reindeer with those of five human volunteers with surprising
results.

The results of this study was reported in the British Medical Journal last week, just in time for the biggest day of the year for the deer that are essential to the ecosystems in northern climates around the world, not to mention their invaluable contribution to Christmas.

Those reindeer have a lot of work to do pulling Santa's sleigh through the cold night air for 24 hours, so they have creatively adapted to the icy conditions. It turns out that the snouts of reindeer have an extra dense network of capillaries in them, about 25% denser than those of humans. The red blood cells being carried by these capillaries give a red hue to the reindeer noses. Some might even call it a glow -- especially during thermographic imaging after a good stiff trot on the treadmill.

Since reindeer do not sweat, they need some other physiological way of controlling their body temperature and these special nose pads are just the thing. The additional flow of oxygen-rich blood keeps the nose warm and regulates the temperature in the brain.

Christmas
Fun
Fun Stories
News Stories
Science
Wildlife
"When What To My Wondering Eyes Should Appear" . . . A White Reindeer?

9+ Dog Accessories, Toys, And Clothes That Are Finalists For The 2019 Editor's Choice Awards (w/videos)