Stuck Dog Is A "Chip" Off The Old Cinder Block

There are times when dogs are really smart. And then there are times
when dogs are, well, not so much. Take the case of a little dachshund in
Phoenix, Arizona, who got himself stuck in a decorative cinder block
in a wall last month. He had been in the middle of a daring nighttime escape
attempt when everything went terribly wrong. 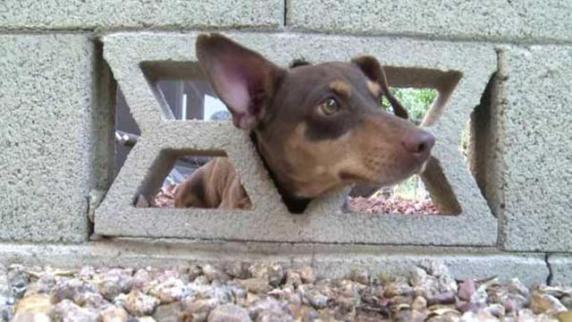 Chip, the Dachshund, Stuck in a Cinder Block Wall (You Tube Image)

The dog had apparently been stuck in the decorative opening in the wall overnight. It wasn't until a neighbor noticed the dog's plight the next morning that the owner knew that her dog was in peril. A quick call for help brought the fire department, police, and the Arizona Humane Society to the canine's rescue.

The firemen held the dog's head and covered his face while they chipped away at the cinder block until they had an opening wide enough to get him out. Ironically, the dog's name is Chip.

Chip, who was fine after the escapade, is a known flight risk according to his owner. The authorities have recommended that Chip be kept under closer surveillance in the future.