Stable Talk: What Kind Of Music Do Horses Prefer? 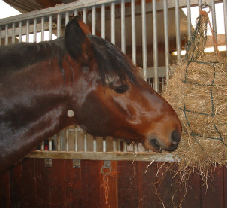 Is this horse listening to rock or country music?: image via equinescienceupdate.com/If you gave your horses a chance to pick which kind of music they preferred, would it be classical, jazz, rock, or country music?  British researchers at the Hartpury College in Gloucester, England, have researched this for you. The horses didn't dance or bob their heads in coordinated rhythm, but they did give away their preferences.

The team observed 8 Thoroughbred geldings that had been stabled for three hours.  They then observed the horses while four different kinds of music played in the stables for 30 minutes each: classical (Beethoven), country (Hank Williams Jr.), rock (Green Day), and jazz (New Stories).  They also observed the horses during 30 minutes of silence (no music) in the stalls.

The results of the study were presented to the 2012 conference of the International Society for Equitation Science.  They found that the horses expressed more frequent stressful behaviors, including stamping, head tossing, snorting and whinnying, during times when rock and jazz music were played.  They displayed even more of these behaviors when jazz was played; the authors believe that was because of jazz's fast tempo and minor key.

So, there you have it.  The horses voted: Beethoven and Hank Williams Jr.

Be Careful. They Look Cute, But... The Animal Video Of The Day!!!

Not All Heroes Are Human -- The Memorial Day Animal Video Of The Day!!!

5 Best Pets For Kids Before Getting A Dog Or Cat

True Facts About the Armadillo -- The Super-funny Animal Video of the Day!!!
Comments