If you've never been exposed to Spongmonkeys before, you're in for a treat... sort of.  Watch this video:

Okay, when you're done spraying holy water all over your computer, read on...

The first time I saw the Spongmonkeys was in a risky 2004 ad campaign from Quizno's.  Let me go on the record that not only do I love Quizno's subs, but I found the ad campaign to be brilliantly subversive.  It utilized a variant of the song above and went like this:

Its easy to see that this commercial wasn't for everyone.

According to Wikipedia, the Spongmonkeys are essentially tarsiers.  Here's what a tarsier looks like: 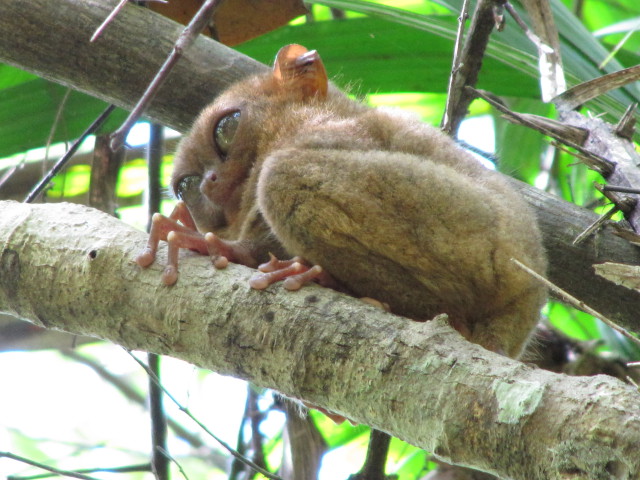 Um... Spongmonkeys sort'a take the cute out of the tarsier, eh?  Maybe its the eyes.  Again, Wikipedia provides a bit of an answer: "'Spong' is a slang term for adding oversized eyes to an image."  Those eyes are most definitely unnatural.

But I think its the scary mouth that does it for me.  Those teeth... gah!!!

Yep.  Its the teeth.

Creator of the SpongMonkeys, Joel Veitch, wears many hats including animator and singer/songwriter.  He has a variety of really funny (and bizarre) videos on his site, RatherGood.  Videos such as this:

I know that my cat likes more hair in her meal.  Every time I leave the table she knocks my plate face down on the floor to maximize the carpet hair.  Nicely done, little girl.  Nicely done.

While Spongmonkeys may not be for everyone, they definitely are eye-catching.  The ad for Quizno's actually incited me to try that sub chain for the first time--and it was delicious.  So, while somewhat twisted and disturbing, I admire the sandwich chain for thinking outside of the box and using Veitch's unique creations to gain consumer awareness.

And at least we can rest easy knowing that something as creepy looking as a Spongmonkey is not a real creature... hiding in the closet... waiting to burst into song.

Like Wine AND Dogs? There's A Wine Club For You
Designer Leather Zuny Animals Turn Homes Into Artsy Zoos!

New Kittens On The Blocks: The Top 7 LEGO Cats
Comments