On the evening of May 8, 2012, residents in Sadiya, Upper Assam, in
India experienced an event that could have been the stuff of science
fiction. Most of the inhabitants of one neighborhood had attended a
program, after which they were engulfed by a hoard of spiders that
started biting them. 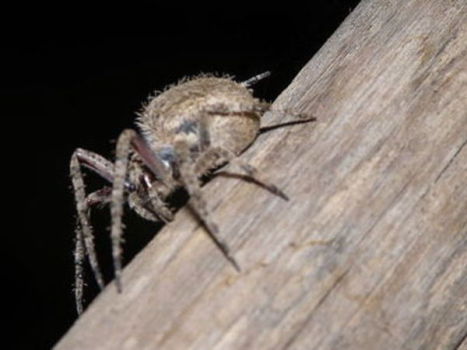 A tarantula-like spider species in India

Panic ensued as people tried to get away from the terrifying mass of tarantula-like arachnids. In the hours following the invasion, the local hospital became overrun by people who had suffered bites. Two people even died, allegedly of spider bites. Without thinking about the loss of critical information, authorities allowed the bodies to be cremated.

On May 22, a team of scientists arrived and camped out for a couple of nights to collect specimens. While they still do not know what species of spider it is, it is apparently a highly aggressive spider that jumps at anything that comes close. Some of those bitten said that once the spider bit, it latched itself on to them. The toxicity of the spiders is not yet known, so the fatalities may have been from an allergic reaction rather than a poisonous bite. These two people also went to witch doctors first, who cut open the wounds with razor blades to drain them. It is possible that they may have contracted infections from this process.

Whatever species of spider it turns out to be, it is new to Upper Assam. It is unknown where they come from, or why they have moved into the area. Residens in the affected area are staying indoors during the evening hours when the spiders are the most active.

News Stories
Weird, Odd or Bizarre
Working 11-7, What A Way To Make A Living
I Can Go To Work While My Pet Sleeps In MYLAP™

Guardians To The Rescue for Puerto Rico's Hurricane Animal Victims

Texas Court To Rule On Value Of A Dog
Comments