Three very lucky special needs cats in Edmonton, Alberta, Canada have
been given an amazing gift by their owner -- the chance to spend time
outdoors safely. The owner, who goes by the name dawnwastaken on Reddit,
had decided to quit smoking and needed a project to distract her from
the cravings. So she decided to build a cat patio -- or "catio" -- for
her trio of felines. The result was cat heaven. 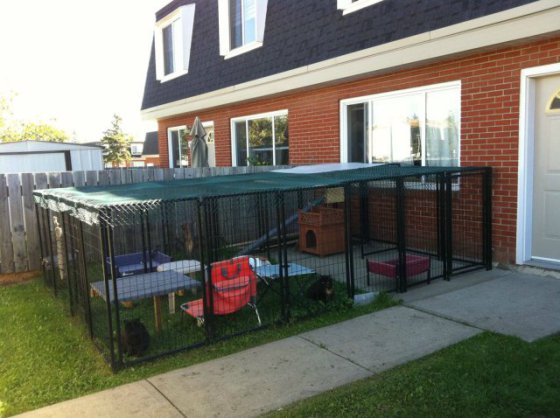 Three years ago dawnwastaken bought a dog enclosure and put it together. The cat patio Mach 1 allowed the cats to go outside but was small enough that the two cats that don't get along had some serious issues with one another. The other problem with the first version was that it required the kitty mama to keep opening and closing the front door all day. 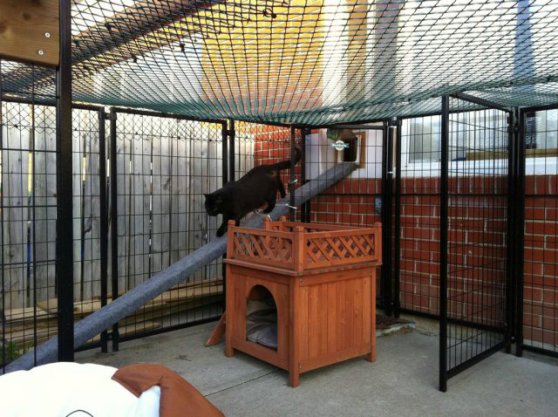 So back to PetSmart and another dog kennel. This time she worked on creating a more permanent solution. The two enclosures were pieced together into one larger one and placed over a living room window so that the cats could come and go at their pleasure most of the time. She laid fencing across the top where the included roofing did not reach to create an open-air roof so that the cats couldn't escape or be attacked. This was firmly secured with cable zip ties.

According to dawnwastaken, "It's really sturdy. The neighbor's 60 pound dog jumped the fence and walked around on top of it." 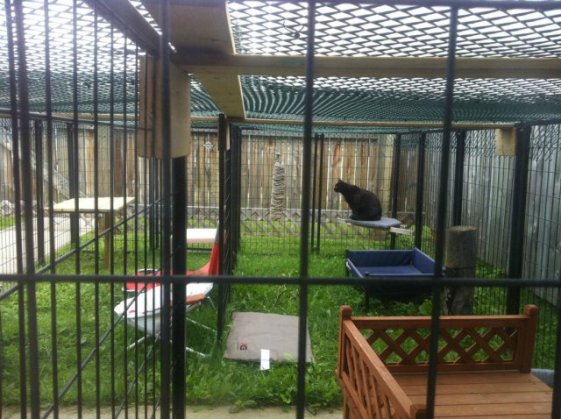 A third enclosure was eventually added for even more space. Custom features like the entrance/exit ramp, different levels to view the world, and a number of comfy napping spots have been added over the years.

The three cats, Jerry, Nova, and Hitch have found a new leash on life with the addition of the patio to their world. Even in the dead of winter, with lots of snow and temperatures below 0°, the cats insist on making an outdoor trek. 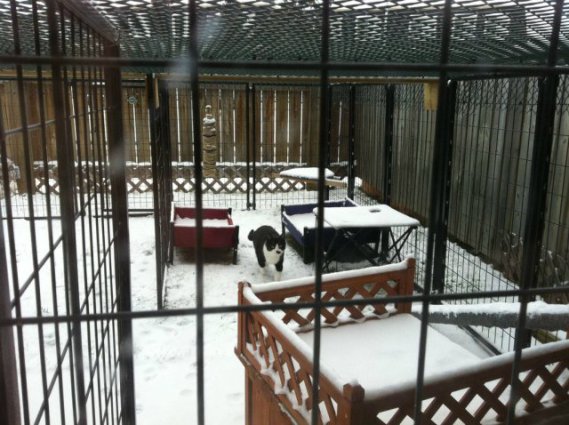 Cat Patio in Winter (Photo by dawnwastaken/2013. Used by permission)

Jerry, the black and white cat, has genetic heart disease and has started showing signs of heart failure. Shortly after dawnwastaken adopted him from the shelter he was at the vet. After many visits and consultations with specialists in both Canada and the US she was given the news about the terminal disease. The shelter offered to take him back and give her another cat for free. She couldn't do that to a family member, so he stayed.

Nova, the tortoiseshell, is diabetic and needs blood testing and insulin shots every day. She also had fatty liver disease which left her with digestive problems. 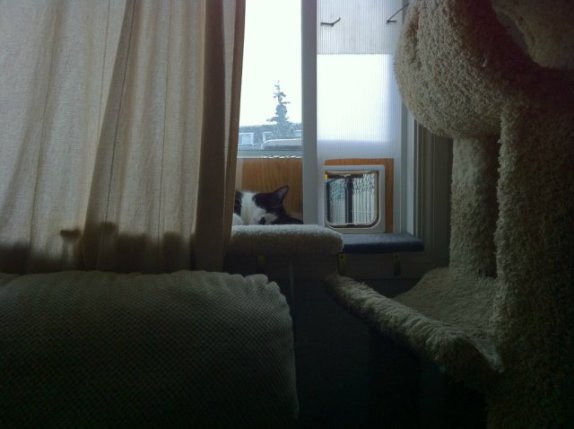 Hitch has cerebellar hypoplasia and immune system disorder. He requires special attention and care for a difficult disease that results in jerky movements, tremors, and difficult movement. He often falls down and is challenged by using the litter box. Dawnwastaken dealt with this by purchasing a box with high sides and taught him to lean against it for support so that he no longer falls in his own poo. She is such an amazing cat mom! 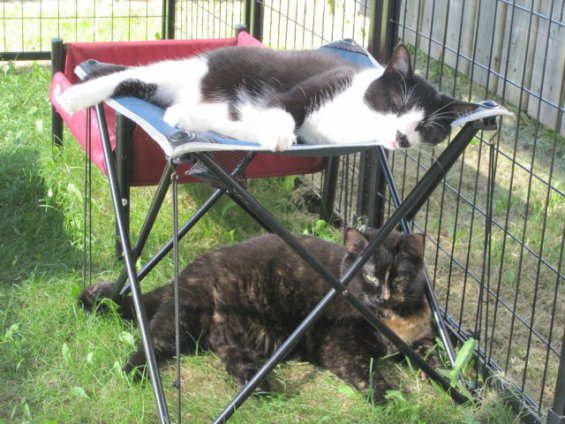 Cat Patio in use (Photo by dawnwastaken/2013. Used by permission)

Dawnwastaken says that the cats "absolutely love" their patio and the chance to get back to nature. Jerry, who also has asthma, has been able to stop using his inhalers now that he is able to go outside all of the time. The fact that dawnwastaken has stopped smoking undoubtedly has everyone in the household breathing easier these days.

Next addition to the structure? A tower or two. Cool!

Silver Spoon Sunday: Buckingham Palace
We All Have Our Limits -- The Animal Video Of The Day!!!
Comments