Who's Your Daddy? A Southern Right Whale In The Neighborhood

A new study, the first published on the paternity of southern right whales - no not southern white males - gives hope to a species that was rendered nearly extinct by whaling off the Australia and New Zealand shores. 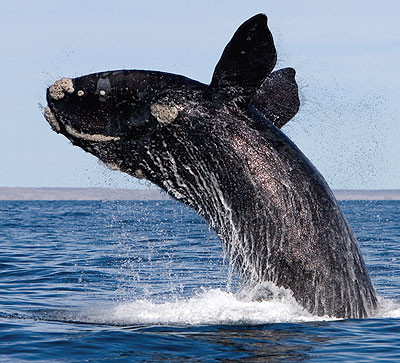 Southern right whales have a scaly head and a huge blowhole: image via sdnhm.org

The study, conducted by researchers at the University of Auckland, Oregon State University, and the New Zealand Department of Conservation, found that most of the right whales born near the remote sub-Antarctic islands of New Zealand were fathered by males from the same local population.  These findings mark the southern right whale as unique, because most other male whales travel from their colonies when grown.

(Another unique behavior of the species is that male right whales confront other male whales by sexually conquering a female whale, rather than fighting the other male one-on-one.)

Perspective drawing of right whale vs. man: image via wikipedia.org

The female southern right whale gives birth only every three to four years, and even though the male is not monogamous, the population grows very slowly.  But the New Zealand population of southern right whales appears to be growing since the 1920's, when researchers estimated there were fewer than 100 whales left from a population of more than 30,000 in the late 1800's when the Europeans started whaling in their seas.

The Europeans, it is said, gave these southern whales the name 'right whales' because they were the 'right' whales to kill, meaning they were easy to kill.  They glide near the surface of the water, swim close to the shore and to large boats, and are easy targets to hit.  Whether the origin of their name is true or not, they were, indeed and unfortunately, easy to kill, at least until all right whales became protected in 1949.

The full study appears in the early edition of Molecular Ecology