Like a masquerade party gone to the dogs, or something out of a spy movie, the latest craze in Southeast Asia is to disguise your dog as something other than a dog. For instance, while the Giant Panda is on the endangered species list (only 800 are currently alive in the wild), the Chinese have found a way to add to their population -- namely by disguising their dogs to look like baby pandas. 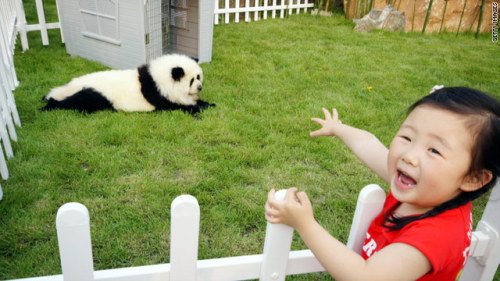 These chow chow dogs are now being called "Pandogs" as if they were a new breed. Dyeing pets has been a trend in pet pampering for quite some time in the exotic Orient according to Emily Lodish with the Global Post. "At last summer's Pets Show Taipei, there was a fierce dog-dyeing competition," she notes.

Somewhat ironic for countries in Southeast Asia, since just 10 years ago, dogs were still eaten in public restaurants and actually raised on farms for that purpose. Traditional Chinese medicine believed that so-called "fragrant meat" from dogs could fortify one's health. Now, eating dog is considered by many as an embarrassing reminder of a poorer time.

With the economy on somewhat of an uptick, wealthy Chinese and Taiwanese are now eager to show off their dogs, and masking them to look like other animals are varied -- even tiger look-a-likes have been spotted on the streets. Here, these ladies took their painted dogs out most recently to attend the launch of a new pet park at Dahe Mincui Park on June 5, 2010 in Zhengzhou, Henan Province of China. 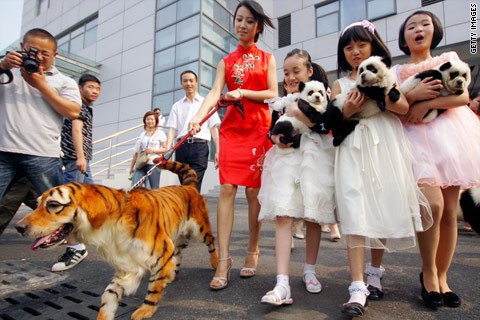 The Chinese are always quick to embrace pet trends, and it is not unusual for owners to take their dogs to grooming parlors where they are not only given a shampoo and trim, but a multi-coloured dye job as well. It's become a huge industry and people are spending THOUSANDS on coming up with new and unique disguises to outdo their neighbors.

However in 2013, these Asians will be facing a most difficult challenge when attempting to disguise their dog in accordance with the Chinese Zodiac - as it is the Year of the Snake!

But then again, anything is possible! 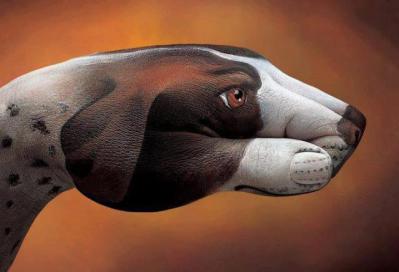 Don't Do This! The "Swimming With Caimans" Animal Video of the Day!!!!

Could This Be Love? The Valentine's Day Animal Video Of The Day!!!

The World's Most Patient Cat -- Animal Video of the Day!!!
Comments