Some Beautiful Animals From The Emerald Isle To Bless Your Day

The holiday honoring the patron saint of Ireland, St. Patrick, is a day of national pride and tradition; a harbinger of spring marked by colorful parades and celebrations in most large American cities, corn beef and cabbage and the ubiquitous and joyful solidarity of the wearin’ of the green.

Humans, Irish or otherwise, however are not the only ones celebrating this festive occasion. Animals indigenous to this island nation situated off the northwestern tip of Europe wear their national pride on their paws, heads and furry backs only because sleeves are not available.
Although there are more than indicated here, below are some of the more well known creatures of Ireland. 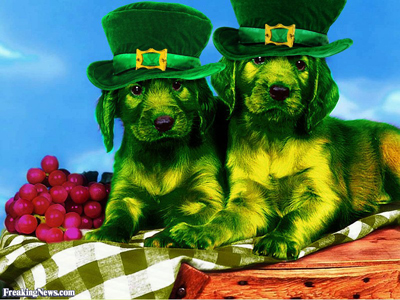 Also known as Big Red, the Irish Setter  first became popular in 18th century Ireland. Most agree that the breed is an amalgam comprised of mixtures of Irish Water Spaniel, Irish Terrier, English Setter, Spaniel, Pointer, and a jigger of Gordon Setter.

Although known for the majestic, rich beauty of its colorful coat, the affectionate and loyal personality of this highly spirited hunting canine far exceeds its natural assets. If neglected, the setter can be destructive; an owner must be willing to commit time and effort to this sensitive dog and not forget to take him or her along to any St. Patrick’s Day celebrations. These dogs need a lot of exercise and keeping them happy reaps many rewards for their owners. 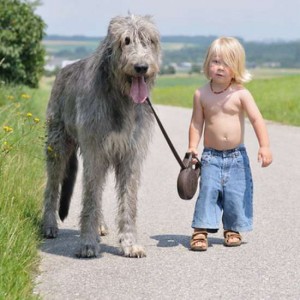 Okay, I won’t tell your mom, but don’t forget, I am still taller than you.

This colossus whose coat comes in brindle, gray, fawn or red, grows to stand about 35 inches tall and can weigh up to 120 pounds. With a true Irish fun-loving spirit, the Irish Wolfhound (Link) has a very gentle nature and makes a wonderful drinking companion but terrible watchdog. So bring him along to share in the festivities and brag to those who may not know that this breed dates back at least 5,000 years.

Once meeting an Irish Wolfhound, it will be hard to believe that in ancient times this dog was a ferocious adversary on the battlefield. These days however, you are dealing with a cuddly teddy bear that craves affection and is wonderful with children. There are few dogs that make better family pets, but their life expectancy isn’t so long; many develop and die of bone cancer. 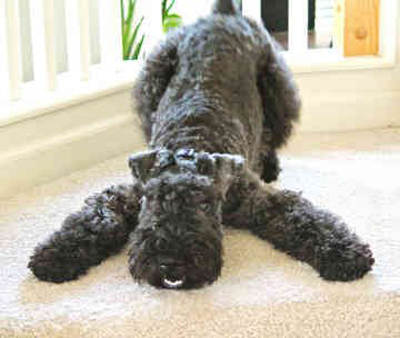 I don’t want to lie down. I want to go to the parade!

Bred to retrieve and herd, this energetic and fun loving dog is the ideal house pet as long as there aren’t other pets in the home. The origins of the Kerry Blue Terrier are somewhat shrouded in mystery. Most believe this breed originated in County Kerry back in the 1700s. One legend tells of a Russian ship wrecked in Kerry’s Tralee Bay and a blue coated dog that swam frantically onto the shore. Stories of random matings with all the female dogs were said to have occurred in the hope of reproducing the animal’s splendid and most unusual coat.  Whether a true tale or blarney, on this very special feast day, there's no doubt if the Kerry BlueTerrier had a choice of coat color, it would be green.

I love a parade!

Developed some time in the early 19th century, these unusual looking dogs are known for their red curly coats, smooth face and strange rodent-like tails. The Irish Water Spaniel  loves the water and is a  natural retriever; the coat is naturally oily to repel water and keep the underpart of the body dry, operating in the same fashion as a raincoat slicker.

Their origins are uncertain, but it is believed that this breed may be a common descendant of the Barbet, the Poodle and the Portuguese Water Dog. A dog named Boatswain was the world’s first modern Irish Water Spaniel. According to records, he lived from 1834 to 1852.  Records do not indicate however, how many St. Patrick Day parades this dog attended, but it's probably safe to assume that there were many. 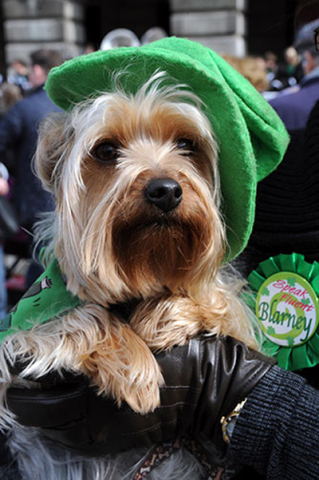 I really am Irish. I just don’t have the papers to prove it.

This little guy wants to get into the act and who could have the heart to turn him down? It's all about joy, pride and gratitude and most would agree that he qualifies. 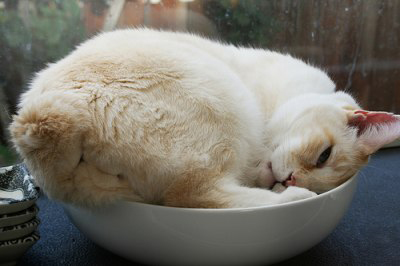 I did  want to go to the parade, but something took over my will to stay awake.

No one knows how the tailless Manx cat found its way to the Isle of Man located in the Irish sea between Ireland and England, but it has been their home for centuries. Irish in spirit if not by birth, legends abound about their origins. Some claim these cats were on board one of the galleons from the Spanish Armada that wrecked on the island in 1588. Supposedly these cats survived even though the mice living on the island didn’t.

Whatever their origins, scientists believe that the cats arrived on the Isle of Man with their tails and a spontaneous mutation within the small gene pool of the domestic cat population occurred. Being a dominant gene, the trait passed from one generation to the next,  albeit different tail stub lengths and types did evolve over time.

Manx cats have wonderful personalities and make great companions.  Even without their tails, they express themselves very well and are fun- loving and active. They bond well with both other animals and their human companions. Even though they cannot claim Ireland as their birthplace, neither can the patron saint of Ireland, St Patrick, and Manx cats have been infused with the proud Irish spirit and pride as surely as any indigenous species.

A Cat Irish In Spirit 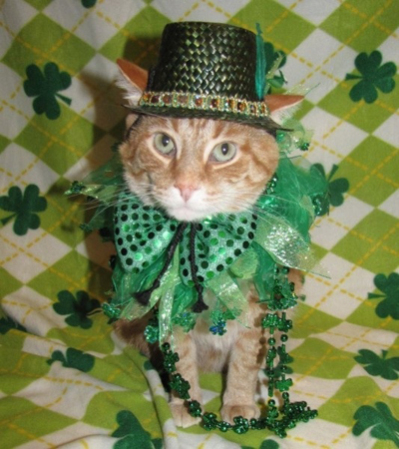 No blarney, Liam. I made the outfit myself!

Being born under Irish stars can’t happen to everyone, and even some cats who have never seen the Emerald isle can share in the joy of St. Patrick’s Day.  It’s all in the attitude, and if St Patrick Day observers have anything to say about that, it will have to be a joyful one. 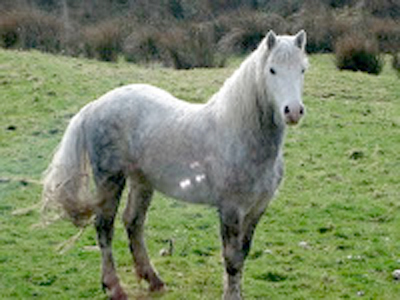 I’ll have to settle for a green field. Everyone else went to the Parade.

Ireland’s only native breed of horse, the Connemara pony is the largest of the Irish pony breeds and it is known for its good-natured spirit. These ponies stand at 12.2 to 14.2 hands high and are known for their athletic builds and good-natured dispositions. They are very sure-footed which is not a surprising attribute considering their origins are along the rocky coast of western Ireland. They are resilient, adaptable and hardy creatures and they come in a variety of colors which range from gray, bay, roan and chestnut, to palomino and cremello, which is also known as Blue-Eyed Cream.

The history of this pony dates back to ancient times and it is believed that the Celts who were highly skilled horsemen, developed this breed  from Scandinavian ponies that the brought to Ireland by the Vikings. Much legend and fable intertwine with the truth about this majestic creature, but that it is a truly an indigenous species is evident.

In summation, Ireland is a nation of many animals all of whom somehow become infused with the joyous spirit of the people who call this proud island country home.

Happy St. Patrick’s Day to all!