Dissimilar to their human masters, dogs don't enlist in the U.S. Military -- they're drafted. And while they have no say in the matter, all of these four-legged recruits take their responsibilities very seriously. Military Working Dogs (MWDs) are however still formally considered 'military equipment' versus the co-species in arms that they really are. But all that might change with the new bipartisan Canine Members of the Armed Forces Act if Congress would only act.

The bill proposes reclassifying MWDs as "canine members of the armed forces," in addition to simplifying the adoption process for retired military dogs. If passed, the law will require the military to fund retired dogs' veterinary care, at no cost to the taxpayer. And more importantly, it will allow the secretary of defense to recognize military dogs killed in action for performing courageous acts of service in the line of duty.

Presently, the military invests about $80,000 to $100,000 in the training and care of each MWD. They serve 10 to 12 years protecting U.S. troops in places such as Iraq and Afghanistan and usually retire due to their age. Occasionally, dogs develop canine post-traumatic stress disorder or sustain other injuries and must retire sooner. Under the current legal guidelines, the military is not required to pay for soldier dogs once they are removed from combat and retire.

While the bill is still waylaid, the Retired Military Working Dog Assistance Organization (RMWDAO) is thankfully filling the void. Founded in October of 2011, it was formed as an advocacy group, while the push to get the military to reclassify MWDs from “excess equipment” to “canine service members” is still in play.

Under current legislature, RMWDAO can raise money to transport dogs home from war, get them adopted, and provide them with resources for any future veterinary care. 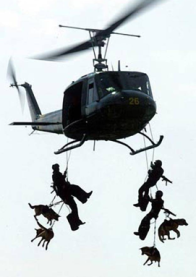 known of these soldier dogs is probably Cairo, who applied his keen military tactical skills to assist the SEAL Team Six operation that killed Osama Bin Laden. Other MWDs serve as everything from bomb sniffers to troop companions to search and rescue dogs (and also serve in guard roles, such as duty at Guantanamo Bay).

In a GlobalAnimal report, Duke University student Anthony Russo re-emphasized the need for Congress to act: “If we are bold enough to integrate canines into the military, shouldn’t we also be compassionate enough to reward these valiant heroes by affording them the same love and care that we do our own pets?”

Reporter Alisa Manzelli capsulized what a lot of us are feeling about this important issue: "In the midst of a decade long war, it is important for us as a society to not forget that our use of military dogs is a privilege, not a right. We owe these dogs that have given us so much the comforts for them to enjoy their lives up until their last natural breath."

The Canine Members of the Armed Forces Act (H.R. 4103) was introduced in the 112th Congress, which has adjourned. It has not yet been reintroduced. If you want to help support the passing of this bill, Care2 asks you to sign their petition to remind the folks we elected to office that they can no longer kick this important issue down the road.

Sharks In The Mall A Danger To No One

See You Later Alligator, In A While, [Lacoste] Crocodile