Social Media Attempts To Save Man's Best Friend From Euthanasia

Over the course of the last several years, social media has been known to fuel the fires of protest, social upheaval and even assist in the election of world leaders. It's been one of the 21st Century's vital tools in reaching the masses and drawing instant attention in real-time for the causes that serve mankind. This week's that ecosystem widens uniquely to include aid for man's best friend.

Rufus is a friendly, one-year-old Beagle who due to a harsh twist of fate has been sentenced to death by Orange County FL Animal Services because of an unfortunate incident that occurred in the pup's home. His owners don't want him euthanized and they are reaching out via social media channels to thwart the efforts of the system to put him down.

While Nicole West, the owner of the brown-and-white beagle-pug mix who bit her 4-year old son Chazz in the face was originally responsible for turning him in to the Animal Services, she's had second thoughts. Since that time, she has reached out to the power of social media to turn the tide of public sentiment in her dog's favor.

Mayor Jacobs & RufusSo much so, she's attracted the attention of local politicians prompting Orange County Mayor Teresa Jacobs to become one of Rufus' major champions. Within just a few days, the major posted photos on Twitter that

circulated widely with the hashtag #SaveRufus. With now over 23,000 likes on Facebook (as of this posting), fans have expressed their concern while requesting Rufus' life be spared.

Cases like this are not uncommon with household pets, who when feeling threatened will react instinctively without malice aforethought. In this case, Rufus misread the cue when his toddler buddy appeared unintentionally to show some form of aggression.

The Lexus Project, a New York-based nonprofit is attempting to keep Rufus alive, as they are no stranger to these types of cases. O

ver the course of the last three years, they have worked tirelessly to aid "dangerous dogs" across the country from capital punishment.

Orange's Animal Services euthanized 104 dogs during the previous fiscal year for being dangerous, records show. Few made the news. So, it's fortunate that by selecting social media channels, all parties have found the right bully pulpit to fight on Rufus's behalf.

In addition to the Twitter and Facebook accounts, as of this posting, more than 160,000 have signed the dog's

change.org petition and donations have poured in to cover the court costs and kennel fees for Rufus.

"Although the attorneys that the group hires usually work pro bono," Robin Mittasch, president of The Lexus Project said, "the court costs that come with saving a dog are usually $1,500 to $3,500. Some more complicated cases can cost thousands more."

At the end of the day, according to the change.org website, "the child (Chazz) was not traumatized (and) the family loves the dog and want him to live!"  As one FB fan posted on a secondary fan page, titled: Team Rufus, "this pic makes me start tearing up… Rufus knows & misses his little buddy, you can see it on both of their faces." 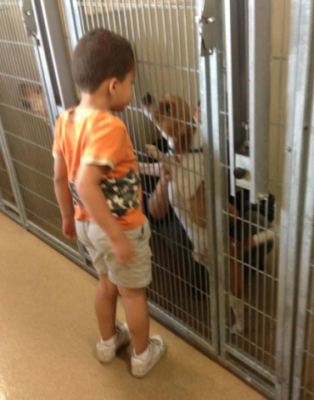 These Polite Dogs Pray Before Dinner -- The Animal Video Of The Day!!!

Zebra Versus Zebra! The Animal Video of the Day!!!
Comments