A hotel near Melbourne, Australia was invaded by a very cute, but
unwelcome, guest recently when a koala bear sauntered in like it
belonged there. Closed circuit cameras caught its journey as it walks up
the stairs and into the 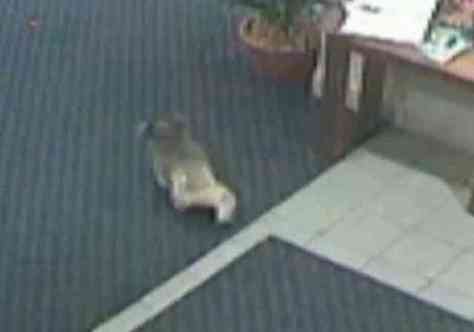 Koala Bear Wandering Through a Hotel in Australia (You Tube Image)Alexandra House in Hamilton, just west of the
capital city. Looking as though it was on its own personal pub crawl he
made a beeline for the bar.

It took a while for the staff of the hotel to notice the little marsupial as it walked unerringly through the lobby and other public areas, right past paying hotel guest, on its way to the bar. Before it could order a single eucalyptus shooter they were trying to corner it using signs, but they were no match for the furry intruder.

Wildlife workers were brought in to escort the koala out of the hotel and return it to the wild completely unharmed. This is apparently the zoological equivalent of calling it a taxi.

No one knows how it ended up away from its native eucalypt woodlands, how it managed to get into the hotel, or, most importantly, how it knew where the bar was within the hotel.

Perhaps there needs to be a 12-step program for koalas!