Snakes Are Slithering Into Everyday Life

Many people want it to be just an urban legend, but snakes are
slithering into our lives whether we want them or not, will show up
in the strangest places, and when you least expect -- downtown, in cars,
garages, bathtubs, and even in the Everglades.  It is the stuff of fact,
not legend.

According to MailOnliine, a corn snake named Dobby disappeared from his home in Ulgham, 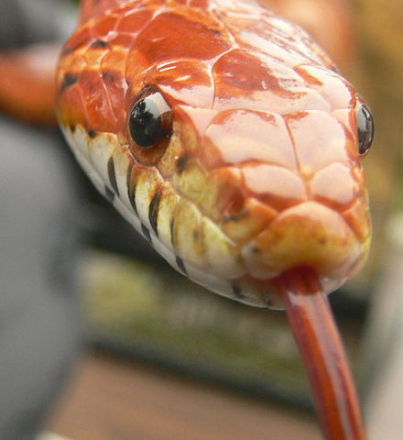 A corn snake like the one found in a home in EnglandNorthumberland, England, last year, much to the distress of Max, his 10-year-old owner. Exhaustive searches of the house turned up snakeless. Everyone kept reassuring the devastated boy that the foot-long snake could still turn up. The reassurances didn't help, especially when the family moved to a new home. Max had to reconcile himself that Dobby was gone forever.

Then, just a few days ago, the family got a call from the new owners of the house. They had found Dobby in the garage. After a year it was much easier to find since it was now four feet long. The new homeowners were more than a little alarmed by their find. They managed to get the snake into a bucket and returned him to Max.

The corn snake is an American species of snake with a placid temperament. He would have survived indoors by feeding on mice.

A couple of days before Dobby's return, police in Portland, Oregon, received a call reporting that a scared-looking snake was on the loose downtown, reported television station KATU. When they responded they found a three-foot-long brown and tan snake that was obviously not a native. With the help of bystanders the officers managed to catch the snake and turned it over to animal control. The owners are now being sought so that the wayward reptile can be returned.

Back in February, Florida television station WFTV reported that two women who went to unload groceries from the trunk of their car when they discovered what appeared to be a boa constrictor draped over the bag. Since the car was a rental they had no idea where the snake came from or how long it had been in the car.

Statesman.com reported the story of a woman who was driving her SUV when a snake began emerging from the air conditioning vent in 2010. At first she thought it was a joke being played by her brother who was in the car with her. By the time three to four inches of the snake had made it out of the vent she was screaming and her brother was telling her to pull over. They bolted from the car, taking the grandbaby with them. The brother ran to a nearby veterinary office for help. The vet came to the car with forceps to perform a snake-ectomy on the vehicle. It was either a bull snake or a rat snake that had been looking for a cozy nook to curl up.

Are these stories for real? I can assure you they are.

Several years ago, on a sultry 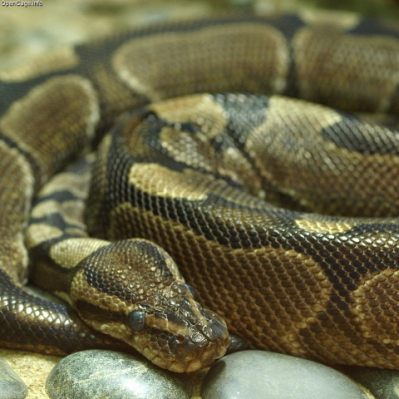 A python like the one I found in my bathtub September evening, I went into the bathroom to take care of business. As I reached to turn on the light I noticed a strange shape in the bathtub. At first I thought that the cats had knocked something into the tub, but I couldn't think of anything that would look like that. Suddenly I just knew what it was. My hand was shaking as I turned on the light. Sure enough there was a three-foot long snake lying in the tub, enjoying the dripping faucet. I really had to go, but I wasn't about to share the facilities with a reptile. I backed out, shut the door so that he couldn't leave, and called the police. A patrol officer showed up a shortly. An animal control was on the way. We stood in the doorway of the bathroom looking at the snake. The officer admitted that this was his first snake call. He picked up the python and was carrying it out of the house. By the time he got to the front door animal control was there with a pillow case. It turned out to be my neighbor's pet that had decided to make a break for it.

Looking back, based on how the cats had been behaving, the snake must have been in the house for at least two to three weeks.  There were no mice around the house that winter.

In the Florida Everglades pythons and anacondas have become a major ecological challenge to the wildlife there. According to Newser.com, the native mammal species in the park have almost been wiped out by the descendants of former pets that had either been released or escaped. The snakes can grow up to 20 feet long and are literally fighting the alligators to be at the top of the food chain. A decade-long study showed that the appearance of some species, like bobcats, raccoons, and opossums have declined up to 99%. Others, like rabbits and fox, have vanished completely.

Experts say that it may be impossible to eradicate the snakes completely and recommend that further studies be done on how to keep them from spreading to other areas in Florida and neighboring states.

What If It Was Devonian Park? The Speculative Animal Video Of The Day!!!