Snail Slime Is The Latest In Beauty Treatments

Move over sheep placenta. The latest substance to be the ultimate beauty
tool is snail slime. Yes, you read that right. Snail slime. Not only
can you purchase skin creams with the slime mixed in, but in Japan you
can drop in at the spa and a technician will get you set up for a snail
facial. Okay, you lie down and they let a few snails walk, er, ooze
their way over your face. 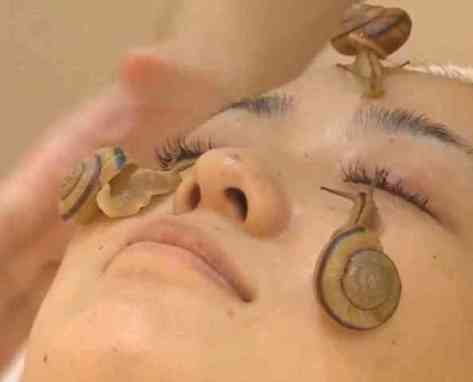 What some people will do for beauty! From starvation to being injected with botulism toxin (Botox) people are willing to do just about anything. What ever happened to aging gracefully?

The characteristic mucous trail that the mollusks leave in their wake is reportedly high in anti-oxidants, hyaluronic acid, and protein. These qualities help moisturize skin, soothe inflammation, and even exfoliate dead skin cells. The salon claims that the slime can even help repair the damage caused by ultra-violet rays from the sun. 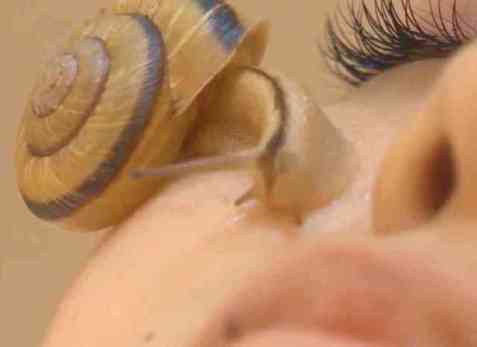 Snail Facial (You Tube Image)he treatment takes an hour and is said to be fairly relaxing once you get used to the small creatures traversing your epidermis. It costs $245 and is called the Celebrity Escargot Course. It isn't just snails though. The snail treatment is followed by massages, electrical pulse machines, and creams with snail slime in them. The creams have been popular in Korea and Japan for many years and the word in the media is that Katie Holmes uses snail cream on her skin.

These aren't just any snails that you can pick up off the patio. No indeed! These are special snails ordered from an organic farm and fed a special diet of carrots, spinach, and Swiss chard -- all organic, of course.

The idea goes back a long, long way. Hippocrates himself (he's the guy that the doctors' Hippocratic Oath is named for) recommended crushed snails for skin inflammation.