Last month, after four years of trying, the Smithsonian Zoo finally
succeeded in breeding the tentacled snake in captivity. The venomous
Southeast Asia native has two tentacles on its nose, a feature that is
unique among 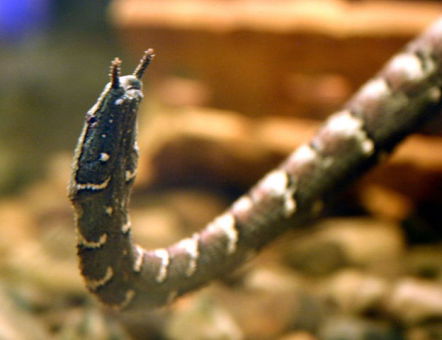 Tentacled Snake (Photo by Ryan Somma/Creative Comons via Wikimedia)snakes. These tentacles are adaptations that the snakes have
developed to be able to detect prey in the murky waters of lakes and
rice paddies.

In order to hunt under such conditions, the snake anchors itself into the mud and uses its tentacles to sense the movement of passing fish. Though they are venomous to their prey, they are harmless to humans.

Unlike most species of snake, the tentacled snakes give birth to live young. Within a few hours of being born the snakes begin acting like adult snakes and have started hunting. They are currently being cared for behind the scenes while zookeepers make sure that they are feeding and growing properly. Once this has been confirmed, the snakes will go on display to the public.

The National Zoo is one of only a few zoos in the country to house and exhibit tentacled snakes.