Dragons have long been creatures of legend -- or have they? There are a
number of reptilian creatures out there that may have contributed to the
legends -- from dinosaur remains to lizards. In the case of cordylus
giganteus, or smaug giganteus more commonly known as the Sungazer Lizard, it definitely has a strong resemblance to
some depictions of a dragon, though it is much smaller. The "giant"
part of its name refers to its size in relation to other members of
cordylid family. 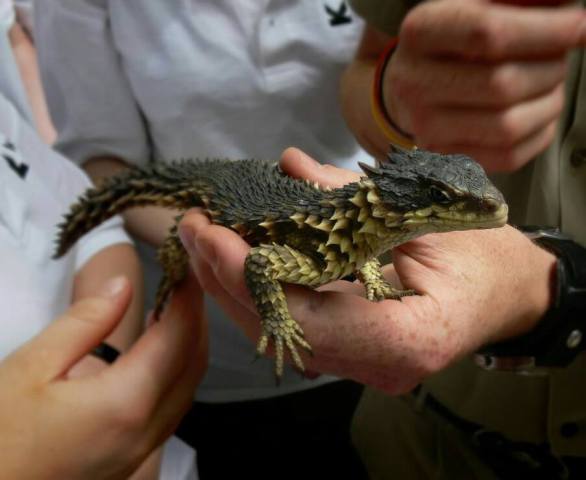 Little
smaug here was first identified back in 1844 by Scottish naturalist Dr.
Sir Alan Smith. It is also known as a Sungazer Lizard for its behavior
of sitting just outside of its burrow in the sun to thermoregulate. It
is native to South Africa and is considered threatened in the wild due
to the loss of habitat. Sungazers do not breed well in captivity, so
most of the lizards sold as pets throughout the world have been smuggled
out of the country without the proper paperwork. 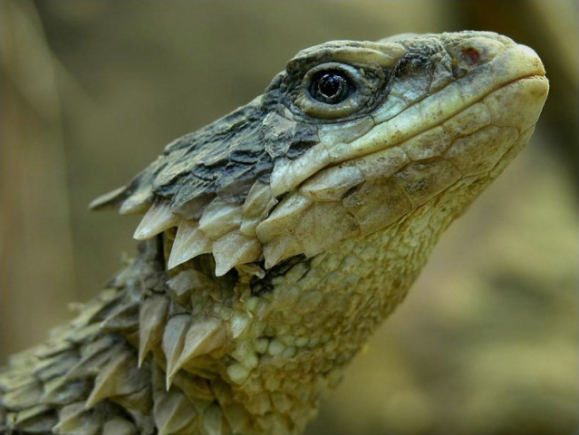 You
may have noticed that one of the names for this lizard is the same as
for the dragon encountered by Bilbo Baggins in the book The Hobbit by
J.R.R. Tolkien. This name was given to the animal in 2011 in honor of
Tolkien. Tolkien was actually born in South Africa, in the area where
these lizards hail from.  According to Tolkien the name Smaug comes from
the Old German verb smeugen which means to squeeze through a hole.

This
heavily plated little guy does indeed look just like we imagine dragons
to look like -- perhaps adding a set of bat wings and some seriously
bad breath. While some of us can see some serious cuteness going on
here, others might find the prickly appearance somewhat frightening.
That is undoubtedly a part of the animal's defense system.

As for
the size, I think that the wizard Gandalf may have decided to curse all
of Smaug's kind and made them small and banished them from Middle Earth
and they somehow ended up in South Africa. That's my story and I'm
sticking to it.

We've often been asked where someone could buy the amazing sungazer lizard.  It seems that smaug giganteus is common in South Africa. Unfortunately, they are difficult to buy in the United States.  We don't know of any good reliable sources for them so you will have to do a lot of digging to find one as these dragons are now rare.

If you are lucky enough to have a Sungazer lizard as a pet and looking for tips on taking care of your Smaug Giganteus, you can find some detailed tips here.

Creatures
Cute
Fun
Lizards
News Stories
Wildlife
'Sampling the Abyss' Voyage Dredges Up More Than 100 Deep-Sea Species Off Australia's Coast
Coloring Book Shows The Other Side Of Unicorns
Jerk Leaves 42-Inch Rattlesnake In Backpack At Texas Bus Stop! (Video)
Who Will Keep You Warm This Winter? How About K9?
Comments