Smallest Reptile On The Planet Found In Madagascar - A Chameleon 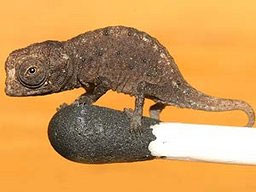 Brookesia micra, believed to be the smallest chameleon in the world: Photo by Jörn Köhler via cnews.canoe.ca

On the African island of Madagascar, where some of the most exotic wildlife is found, German and American researchers have found a unique chameleon, the Brookesia micra, now known as the smallest reptile on the planet.

The little guy (or girl) is so small, he can fit on the head of a match stick, as seen in the photo on the right.  Only 24 millimeters, head to tail, his full length could fit on the American quarter, which is less than an inch in diameter.

According to Frank Glaw, a researcher from the Zoologische Staatssammung in Munich, Germany, tiny species of reptiles are often found in Madagasgar. It is even theorized that some of the larger specimen of reptiles evolved from those found on the island.

"The tiny new chameleons show remarkable genetic divergences between species,
although superficially they closely resemble each other. This indicates that
they separated from each other millions of years ago — even earlier than many
other chameleon species," said Miguel Vences, of the Technical University of
Braunschweig in Germany.

Two other dwarf chameleons were found by the researchers, named the Brookesia desperata and the Brookesia tristis - desperate and sad, because of the dangers to their habitats posed by illegal loggers on the island.

Let's hope that the dwarf chameleons, as well as other dwarf species, such as dwarf lemurs and frogs that provide scientists with so much knowledge about how these marvelous species developed, survive in their wonderfully protected habitats on the island of Madagasgar.