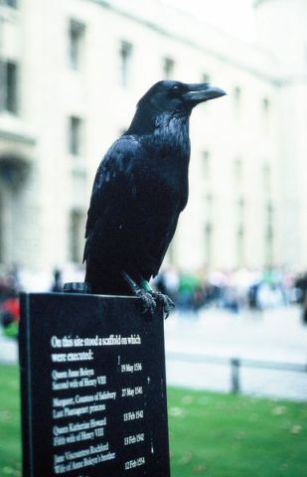 In many cultures around the world, the raven is seen as an ill omen, a symbol ot the supernatural, or even believed to carry the portent of death. During the Middle Ages the raven was also considered a witch's familiar.

It is uncertain exactly when the birds took up residence in the Tower, but legend has it that during the reign of Charles II (1630-1685) the royal astronomer, John Flamsteed, complained of ravens interfering with his study of the stars from the Royal Observatory. At that time the Observatory was located in the White Tower. Charles ordered the birds destroyed. He was quickly advised that if the ravens left the tower, the tower would fall and disaster would ensue for the kingdom. The King changed his mind and decreed that henceforth at least six raven would be kept in the tower to forestall any impending tragedies.

Another legend has it that a Dark Ages king named Bran (Welsh for raven) was killed in battle and he had requested that his head be buried on the White Mount, later the site of the Tower of London.

There are currently seven ravens in residence at the tower -- six and a spare. They are Hardey, Thor, Odin, Gwyllum, Cedric, Hugine, and Munin. They live in special pens at the Wakefield Tower. 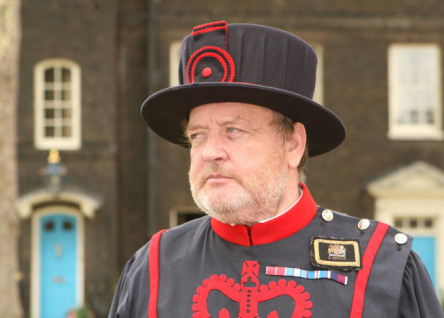 Beefeater at the Tower of London -- the RavenmasterA Yeoman Warder, or Beefeates, is the Raven Master. He keeps an eye on this unusual unkindness of ravens (a group of ravens is an unkindness). He cares for them, feeds them, and keeps one wing of each clipped to prevent escape. This does not harm or hurt the birds, though the occasional bird has been known to make a run for it.

One of the most difficult times for the Monarchy was just after World War II. The raven population was down to just one -- a raven named Grip. Most of the birds apparently flew the coop, it is believed, due to the disruption of the Blitz as the Germans bombed London relentlessly. It is rumored that one of the ravens was kidnapped. It seemed that perhaps the legend of the ravens could be true. 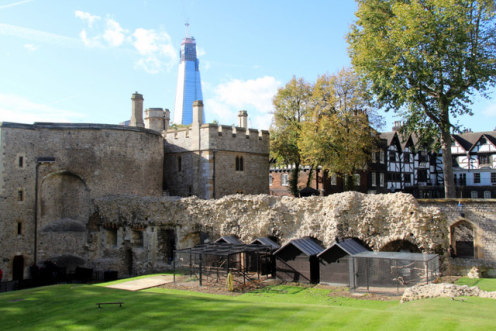 The raven pens at the Tower of London

Not all ravens are suited to the job. In 1986 a raven named George was retired to the Welsh Mountain Zoo for unsatisfactory conduct. He had apparently developed a fondness for chewing on TV antennas. The pampered birds can be quite long-lived as well. One raven, Jim Crow, died at the ripe old age of 44.

The raven called Thor is apparently quite a talker and will repeat things that the Raven Master has said to him with a great deal of talent. Something that has been known to create some confusion in the bird pens.

Birds
History
News Stories
Attack Of The Giant Pink Flamingo
Need A Career Change? This Wildlife Sanctuary Could Be Yours For Free!

Mobile Swallows For Your Home Or Office