Many people collect Steiff stuffed animals. They are popular for their high quality and realism, as well as for their trademark button in the ear. Steiff is a German-based company begun in 1880 making pin cushions in the shape of elephants. Once it was realized that the pin cushions were being usurped by children to play with, the company started making toy animals for children exclusively. The products proved so popular that the button in the ear was introduced in 1904 to prevent forgeries. 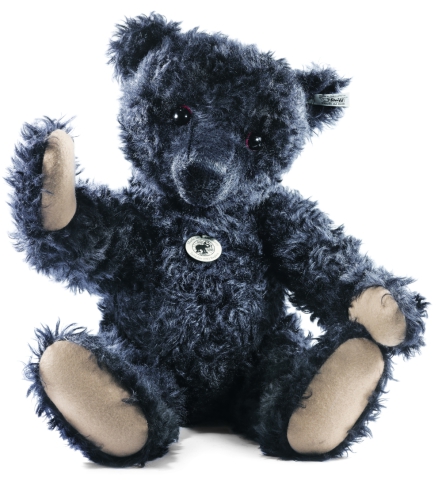 The handsome
and exclusive "Othello," is a limited edition replica of the company's
1912 Titanic bear. When the infamous and supposedly unsinkable luxury ocean liner Titanic sank on April 14, 1912 it was a tragedy that shocked the world. The disaster and the loss of more than 1,500 lives put much of the world into a time of grief and mourning. The Steiff company responded by creating a black mohair bear to mourn the passing of so many. The bear apparently answered some collective emotional need and sold out quickly.

The original bears rarely come up for sale, but for a mere $585.00 you can have an authentic Steiff replica of the original. These bears are collector's items only and are not intended for play with children. Just like the original, Othello is made from black mohair.