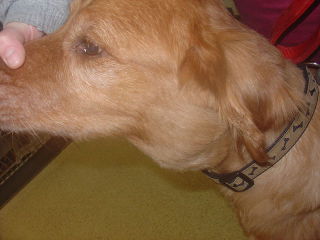 Golden Retriever with lymphoma: image via Wikipedia.org The largest pet insurance company in the U.S., PetPlan, reported that the number of claims due to cancer in dogs remain at at the top of the claims list, but that certain cancers have risen dramatically over just the past year.

PetPlan reports claims for lymphoma rose by 40 percent in 2011 over 2010. Lymphoma is one of the most common cancers in dogs, and though most cases are thought to be genetic, there are environmental causes as well - a well-known cause is the herbicide 2, 4-D. Lymphoma generally attacks the lymph nodes under the throat and armpits, but it can also attack the bone marrow, liver and spleen. 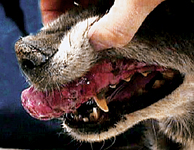 Oral melanoma: image via findavet.us Claims for melanoma, another common canine cancer, were reported as having increased by 837 percent in one year. Though exposure to ultraviolet light may be a factor in canine melanoma, in fact, most cases of this cancer are inherited. Contrary to what you make suppose, more melanomas are found among black and brown dogs than among lighter color dogs.

While various kinds of lumps and bumps that vets classify as 'masses' rose by 25 percent in 2011, actual mast cell tumor claims rose by 76 percent.  Mast cell tumors account for 25 percent of the tumors in older cats and dogs; though not usually malignant, they can be, so should 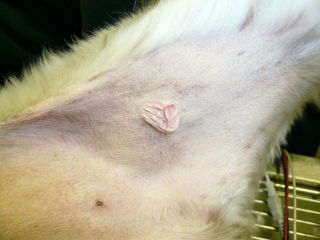 Mast cell tumor on inside of dog's leg: image via Wikipedia.orgdefinitely be checked out.

That's the unfortunate buzz for today!

Sunscreen For Dogs: The Whats, Wheres, Whens And Hows Of Protection