Sharks In The Mall A Danger To No One

Just when you thought it was safe to go shopping at the mall this photo
shows up all over the internet showing sharks swimming in a flooded
mall. It was reportedly a popular mall and science center in Kuwait. 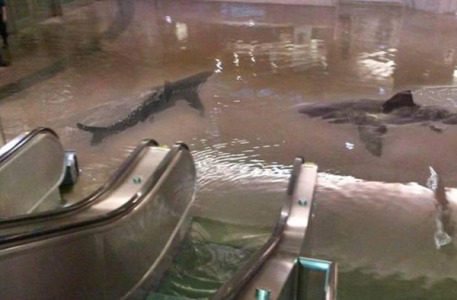 Photo by Jamie King (c) 2012. Used by permission. Rumor had it that they were making their sinister rounds after their
aquarium had collapsed.

Fear not. The photo was quickly admitted to be a hoax by its creator Jamie King. He came forward to admit his artistry when even more versions of this story began to make their way across the social media landscape and into the news world and blog sphere.

King, a fan of hockey and great advertising, created the fake photos after seeing pictures of the shopping concourse in Toronto's Royal Bank of Canada building after it had flooded. It had always been intended to just be a joke.

King's Photoshop skills are no joke though. Techs and graphic design experts are impressed by his work. Apparently making water manipulations look real is a considerable feat.

A true story from January, 2011, may have helped fuel the rumor mill. A large aquarium at a mall in Dubai filled with 33,000 sea creatures, including 400 sharks and stingrays, cracked and began gushing water.  Panic ensued as shoppers fled the mall. No one was hurt and none of the sea creatures made it out of the tank.

A Pet In Every Classroom: How One Nonprofit Is Trying To Make That Dream A Reality
Stained Glass Cat Table Lamp