Shark Misses Hole-In-One On The Green

Anyone who watches TV knows that the OC
(Orange County, California) is a place given to drama -- and sometimes comedy. Such was the case at
the San Juan Hills Golf Club last week when a shark turned up near 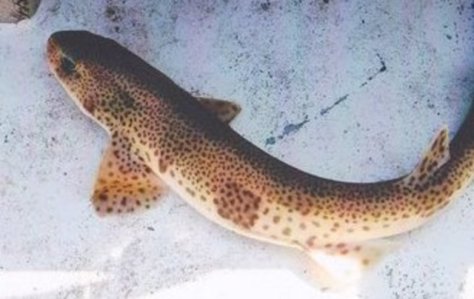 Dogfish Shark (Photo by Peter van der Sluijs/Creative Commons via Wikimedia) the
12th hole. Golf course
workers and a state fish and game official have commented that something
fishy was going on, but they weren't sure who, or what, was
responsible.

The two-foot-long shark was discovered alive and flopping in the grass by an employee last Monday afternoon just a short distance away from golfers trying to make their putts. No word on whether or not the shark was trying to play through. A golf marshal removed the shark to the clubhouse for questioning. There was a puncture wound under the shark's dorsal fin and fresh blood. Since the shark wasn't willing to talk, the golf course staff determined that the culprit of the whole incident was a bird, and most likely an osprey.

The shark was rinsed off and put in a bucket.  One of the golf cart attendants drove the fish the two miles back to the ocean and released it near Dana Point Harbor. The shark made a quick disappearance once it hit the water.

The club operations manager commented that this was the strangest thing that ever happened at the club. The only question left was why the osprey would have dropped the shark on the 12th green. Perhaps the bird had been hoping for club membership if it could make a shark-in-one.