Shark finning is a brutal act of poaching that is causing a sharp
reduction in shark populations and disrupting the ecosystem of the
world's oceans. The devastating illegal operations are all to support
the Chinese demand for shark fin soup, a delicacy that can sell for $100
a bowl.

The inhumane practice involves catching the sharks, cutting the fins off of the live sharks, and then casting 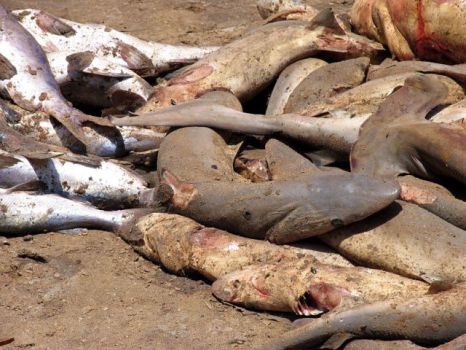 Shark carcasses discarded after being finned.the shark back into the water. The still-living shark, unable to swim. sinks to the bottom, being eaten alive by other fish. This is done to save more cargo space for the fins. In comparison, the meat is not worth much. All species of shark are taken. An estimated 100 million sharks are killed in this manner every year. The loss is happening far faster than sharks can reproduce.

Sharks have been an indispensable part of the ocean ecosystem for 400 million years, predating both humans and dinosaurs, and surviving longer than any other large animal on earth. Their presence in the sea has helped give rise to such natural defenses as schooling behavior, camouflage, speed, size and the ability to communicate among other ocean species. Sharks also keep the population of other sea creatures in balance. (Source: Sharkwater) 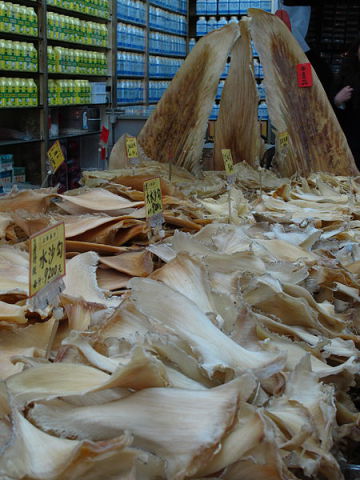 Shark fins for sale While each country with a coastline is responsible for the laws regarding fishing in their waters. Some have laws against shark finning, others do not. The practice does violate the United Nations Food and Agriculture Organization's Cost of Conduct for Responsible Fisheries, and is contrary to their International Plan for the Conservation and Management of Sharks. (Source: Sharkwater)

The fins are collected for a booming trade for them in traditional Chinese medicine and the Chinese delicacy shark fin soup. The fins reportedly have no true medicinal value and negligible nutritional value. In addition, they are virtually flavorless. Still, people in many Asian countries believe that shark fin increases sexual potency, improves skin, prevents diseases of the head, and lowers cholesterol. It is also reported to boost chi, or life energy, and to support bones and internal organs.

As a part of a meal, shark fin soup is a dish that is expensive and time consuming to make. The flavors of the soup come from the other ingredients. In most cases only a thin strand of the fin, similar to a noodle is found in the soup. It does add texture to the soup and is said to be somewhat chewy and crunchy. For many years 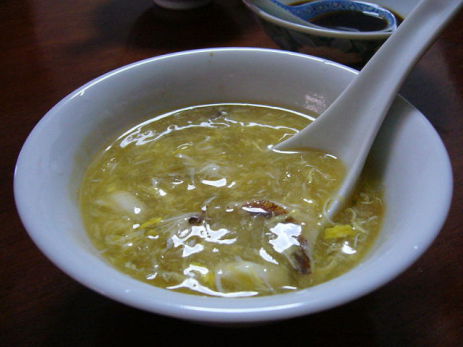 Shark fin soup demand for the soup was low since only the wealthiest could afford it. Now that the Chinese economy has been thriving, the demand for shark fin has skyrocketed. (Source: Treehugger, Wikipedia)

Much of the trade is controlled by organized crime, such as the Taiwanese mafia, and corruption. The Taiwanese mafia reputedly runs the shark finning trade in Costa Rica with an iron grip. The Indonesian mafia is also said to have a hand in the Costa Rican trade. While other countries are also involved with shark finning, Costa Rica has become to most notable for having a large number of "longliner" vessels which are used in shark finning, and for allowing shark finning vessels to use its ports, despite having laws against the practice.

Paul Watson, founder of the Sea Shepherd Conservation Society, has recently become somewhat of a 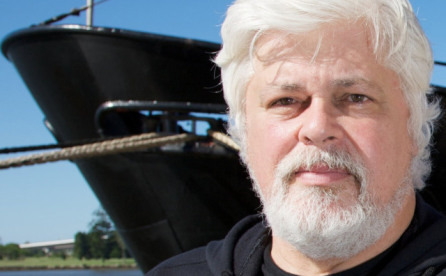 Paul Watson is at the center of the controversy over Costa Rica's shark finning operations"poster-boy" for the battle against shark finning when he was arrested at the Frankfurt Airport in Germany last month to face extradition to Costa Rica over stopping a shark finning incident in 2002. Oddly, the warrant was made based on the word of Costa Rican fishermen who were caught on tape illegally finning sharks off the coast of Guatemala and in Guatemalan waters. The warrant for his arrest has been dismissed by Interpol as being politically motivated.

In 2002, Watson and the Sea Shepherd's ship Ocean Warrior were involved in an incident during the filming of the documentary "Sharkwater" in which the ship and crew ran across the Costa Rican fishermen in their poaching operation. The crew of the Ocean Warrior reportedly hung back and got permission from the Guatemalan government to intervene. Members of the Costa Rican ship have alleged that the people on board the Ocean Warrior were trying to kill them. Watson is charged with violating navigational regulations, as well as attempted murder. He is best known for his Animal Planet reality television series "Whale Wars." (Source: Wikipedia)

As the controversy and the demand for shark fins rage on, shark species are declining at a rate that some experts say will wipe out most species within a decade. While sharks may not be the most popular kids in the neighborhood, they must be a part of the game. (Source: Sharkwater)