'Seven Pyschopaths,' a much overlooked film classic, opened in movie theaters in 2012, and has been one of 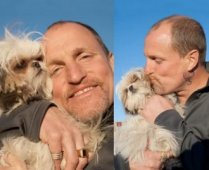 my all-time favorite murder mysteries ever since - right up there, with the finest, such as 'Memento' and 'The Usual Suspects.'  Not so much for it's black humor - although it's some of the finest I've seen since 'Clockwork Orange,' but moreso for Martin McDonagh's ingenious literary ability to weave what at first blush seems like a rambling, shaggy dog narrative - but in actuality is an extremely tightly-woven tale.

And he accomplishes this like a crafty prestidigitator, with slight of hand that creeps up on you -- making you wonder -- "how in the hell did he do that?"

Well, it's the oldest trick in the magician's handbook - it's called: "keep  them distracted until you're ready to show them the final reveal!" While making you focus on what initially appears to be a linear plot line, highlighted by the theft of a lovable shih tzu dog named "Bonny," he's able to concoct seven other story arcs in tandem. All seemingly meandering off in different directions, they are clumsily guided by the alchohol-induced wits of Colin Farrell's character, a would-be screenwriter and his two trusty-yet-over-the-top psychopaths, played by Sam Rockwell and Christopher Walken. 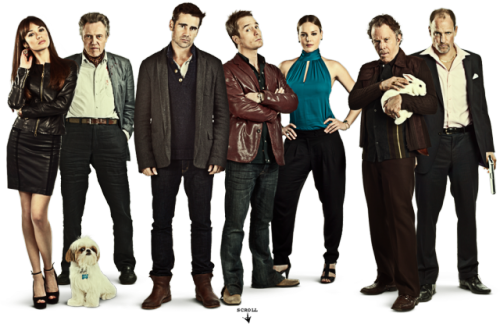 Using a Luigi Pirandello dramatic technique, McDonagh's turns the plot structure of the Sicilian playwright's "Six Characters in Search of an Author" -- on its head. Instead of having his characters seek out an author, McDonagh's author seeks out the characters. Under the guise of Marty the screenwriter, McDonagh actually enters his own film in search of seven psychopaths who he wants to integrate into his next movie script!

And if that wasn't enough of a twist, Marty tells Hans (Christopher Walken's character) that he's not interested in producing just another 'blood & gore' thriller - he wants to skewer some "Hollywood movie" clichés - by giving his characters a sense of humanity - whether they like it or not.

A tough goal for psychopaths (albeit Showtime's Dexter), don't you think? Yet, that is the elegance of this shaggy dog story. By the end of the film, McDonagh has not only tied up all of the loose ends, he's provided us with insight as to how humanity can exist even on the dark side - even when one psychopath takes a stab at trying to prove Ghandi wrong...

From a mercy killing of a cancer patient, to the love of one of the movie's calmest and coolest characters - Bonny, the shih tzu, to a Buddhist monk torching himself in protest of the Vietnam War, to a hysterical tongue-and-cheek final shoot-out, these psychopaths commit heinous crimes hanging on to a thin thread of humanity, in spite of themselves. 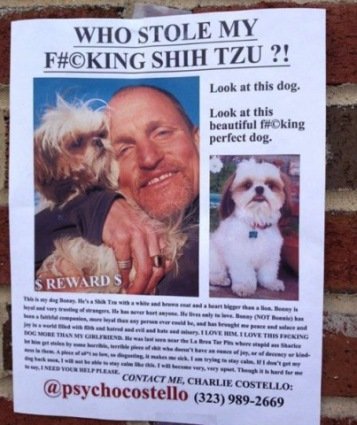 And for those that question McDonagh's skilled craftmanship as a magician - he handles that critique squarely when he hits you over the head by pulling a rabbit out of a hat - literally! And, in so doing, he fractures yet another movie cliché as a nod to his audience that he's fully in control of the psychotic world he's created. Tom Waits gets his close-up as a bunny-loving nut job named Zachariah, who when he's not conducting murder sprees in a Bonnie & Clyde partnership that's gone awry - is comforting little white bunnies who seem to propagate right before our eyes.

Seven Psychopaths - a shaggy dog story? For sure. Does it present inhumanity and humanity as two sides to the same coin. Dead on! 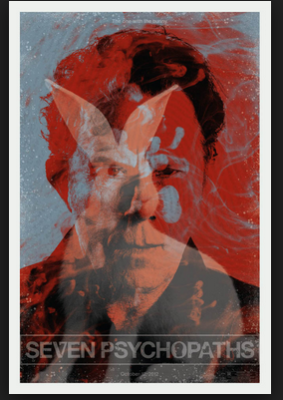