In the past few months a number of sea creatures have been showing up in
the wrong parts of the world, but 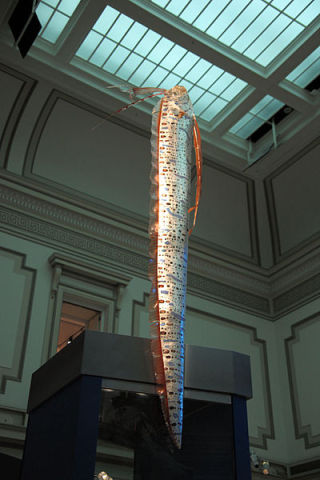 Oarfish on display at the Smithsonian (Photo by Tim Evanson/Creative Commons via Wikimedia)none have been quite as unusual as the
elusive oarfish. The oarfish has rarely been seen alive in the ocean
and almost as rarely found washed up on beaches dead or dying. Recently one
washed up on a beach in Cabo San Lucas.

This one was small for an
oarfish at just 15 feet long. They can grow to be nearly 60 feet in
length and are long and slender with bright orange dorsal fins and
manes. Their silver bodies have no scales. They are named for their
paddle-shaped pelvic fins. It is believed that the oarfish, with their
unusual appearance and undulating motion were the cause of some of the
stories mariners have told of sea serpents over the centuries. The giant
oarfish is also known by the name King of the Herrings. Despite this
nickname, it is not related to herrings in any way, but apparently
received the name for being spotted among shoals of herring.

The
people who found the creature said that it was struggling to breathe and
all attempts to help return it to the Sea of Cortez were in vain. The
remains have been collected for scientific study.