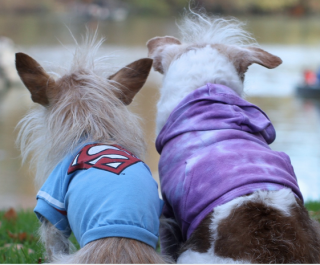 Photographer, Brandon Stanton has experienced a meteoric career boost over the course of the last six years transitioning from a starving photographer to a worldwide celeb. The premise behind his success was a simple one. Capture interesting photographs of people on the streets of New York and then accompany their pics with a interesting backstory. Titled, “Humans of New York,” collectively these capsulized documentaries became the subject matter for his now widely-read blog, while capturing the attention of over eight million folks that follow him on social media.

In addition to humans, it appears that dogs also hold a soft spot in Stanton’s heart. Five years ago, when he happened upon a dog named Susie sitting on a stoop in front of a Brooklyn, NY walk-up, he instantly took a shine to her. As karma would have it, Susie’s owner saw the connection and seeing that he was no longer in a position to take care of Susie, he asked Stanton if he might want to adopt her.

Brandon & SusieStanton was sleeping on a friend’s couch at the time, but recalls that interaction as “one of the best decisions” he ever made in his life.

“I’d never had a dog before,” he said. “It was a new experience. I was introduced for the first time to a dog’s unexplainable and unconditional love. After a few weeks, it seemed that Susie’s only concern in life was staying as close to me as possible. There was now a joyous reunion waiting for me at the end of every workday. And I learned that there are few greater blessings than a wildly happy dog greeting you at the door.”

A Non-Profit was Born

Susie was 12 years old when Stanton took her in, and she lived with him for another 5 years before passing away, April 23rd. But her life definitely served as a inspiration for himself and his fiancée, Erin O’Sullivan to launch ‘Susie’s Senior Dogs,’ a nonprofit that promotes the adoption of older dogs.

Susie’s Senior Dogs is a 501(c)3 non-profit organization, with the goal of creating awareness and increasing senior dog adoptions. As any dog lover will acknowledge, older homeless dogs have a difficult time finding a good home due to their age. There’s a number of reasons for this, but it’s this non-profit’s intent to change that mindset. 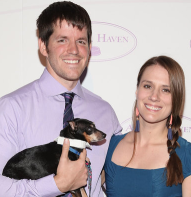 Brandon Stanton & Erin O'SullivanAs Susie the dog noted on their website, “although it’s true that you might have less time together then you would when adopting a puppy, a senior dog makes up for it with their appreciation of being given a second chance — there’s nothing like earning the love of an older animal.”

So, if this post has stirred your emotions and has made you start to think about adopting a dog, please do check out Susie’s Senior Dogs. There you can learn more about obtaining your very own older canine. And, if you're in a position to do so, donations can be made via PayPal using the email adddress: susie.doggie@gmail.com, or your can also give directly on their website here.

Just What The Doctor Ordered: A Prescription For Love
Studies Show Dogs Exhibit Prosocial Behavior When It Comes To Sharing
PetsLady's Pick: Adorable Valentine's Dog Of The Day

Puppy, Pig, and Lady Bug Computer Mice Are Mice Of Many Species
Comments